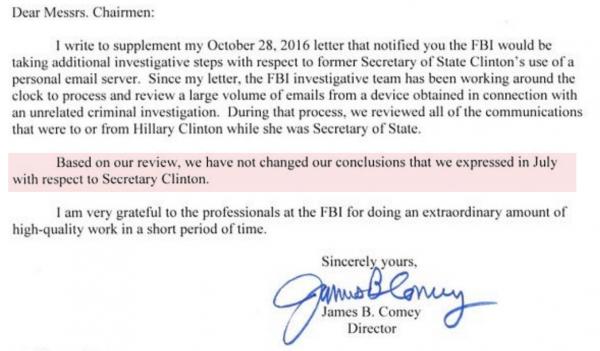 “Based on our review, we have not changed our conclusions that we expressed in July with respect to Secretary Clinton,”  Comey wrote in a letter to the leaders of several congressional committees.

If Clinton wins the election, she should be able to start her term of office without this scandal of her own making still hanging over her head. After all, there are sure to be new scandals in due time, unless she turns over a new leaf like Richard Nixon did when he finally became President in 1968. Herblock, the Washington Post’s iconic Republican-hating cartoonist, even symbolically gave him a shave. (Herblock drew Nixon with a five-o’clock that made him look like an axe murderer.) Yes, the irony is intentional.

If Hillary loses, Comey’s late “never mind!” might stop Democrats from claiming that her inevitable coronation was prevented by a deliberate FBI plot, and allow them to further undermine trust in law enforcement. It might, but it probably won’t.

2. In fact, this process has already started. The Washington Post’s political columnist Chris Cillizza quickly filed a piece called “It’s hard to see how James Comey could have handled this last 9 days any worse.”

It should be used in classes to illustrate what “hindsight bias” means. He also makes a persuasive argument in favor of Comey’s letters—both of them—thinking he’s doing the opposite:

“If this had been 2014 or even 2015, it’s easy to see how Comey could and should make the choice he did. But, it’s impossible to say that he and the FBI operate entirely outside of the political world or that the same rules of the road apply when it comes to when and whether things should be made public.

Referees in the National Basketball Association ref the first 44 minutes (or so) of a game differently than they ref the final four minutes. They understand that in the final four minutes, the bar for a foul is higher because the stakes are raised. Shooting two free throws in a two-point game in the first quarter is very different from doing the same thing with 35 seconds left in the game.”

Unbelievable: Cillizza is extolling the very practice in the NBA that shows that pro basketball has no integrity. This is why I won’t watch the NBA: it’s just a bit short of professional wrestling, with special rules for home teams and stars, and shifting standards for what’s a foul and what isn’t. (Baseball umpires do not call a different strike zone in the ninth inning, even in games where giving an edge to the team trying to mount a late inning rally would be exciting.)

3. In the previous election in 2012, the public received a number of nasty post-October surprises. The IRS had been sabotaging legitimate Republican and conservative organizations to cripple their impact on the election. Obamacare didn’t work the way the President promised it would. Al Qida hadn’t been “decimated.” And more. The  FBI’s handling of this matter is how all information that the public has a right to know before picking a President should be handled by the entire federal government. One of the most prominent rationalizations offered in defense of Hillary Clinton is that all politicians are as corrupt as she is, a corrosive lie that seeks to make the public trust irrelevant. This is how ethical standards die and get turned upside-down. What Cillizza calls bad is what used to be called “ethical.”

She still intentionally violated her own department’s policies on handling and sending e-mail. She still destroyed potential evidence. She still made U.S. secrets vulnerable to hacking. She still lied about what she has done for over a year. She still behaved ignorantly, incompetently, recklessly and dishonestly. Whether the conduct is called criminal or not, it was still unethical and showed wretched judgment, inept management, and contempt for the leader’s obligation to model conduct for subordinates.

5. It is fascinating to watch Republicans flip yet again to impugn Comey, after praising him to the skies as a great American, after attacking him as Clinton conspirator in July. Do these people have any shame at all? Newt Gingrich, whom everyone should know by now has no shame, stated on multiple forums yesterday that Comey “caved.” He is a blight on the political culture, though he is not alone.

6. Just for fun, I reviewed the posts about the spin, lies and falsehoods that followed the first Comey letter announcing that the Clinton e-mail investigation had been re-opened, to see if any of the ethics conclusions (in this post, this post, this one,this one, and this one) needed to be retracted or changed.  They don’t, not a one. Some were bolstered, and by the way, are Harry Reid and Richard Painter going to argue that this letter is a Hatch Act violation too?

7.  Interestingly, we just learned more about Hillary’s recklessness and astounding lack of judgment in her handling of sensitive material, in accounts that raise again the question of why Clinton’s conduct was deemed not to constitute the “gross negligence” that would have triggered criminal charges.

We learned that mom forwarded to  Chelsea Clinton a State Department email that was later determined to have contained confidential information. Now before you flip to the Clinton talking point that she didn’t knowingly send classified information, which was the final edit of Clinton’s “I never sent nor received classified material” lie from last year (and is still a lie, since the Secretary of State’s communications, in and out, are to be presumed classified until it is determined that they are not), understand that there is never a legitimate reason for a government official to forward a government communication to non-government personnel, family or otherwise. Doing this may not be criminal, but it is arrogant, unprofessional, careless, and stupid….qualities of dubious value in a President.

Hillary also, we learned, may have had her maid print out official e-mails. The report, typically, is being ignored by most mainstream media, and Media Matters is issuing its usual spin and denials—hey, as long as the public doesn’t know about it for another day, it won’t matter!—but if true, this bone-headed security breach is certainly consistent with Hillary’s other practices.

8. What should stick with the public, with the Comey letter controversy is behind us, is how the Clinton team immediately shifted into vicious attack mode to discredit a messenger, used its influence to induce former prosecutors to unethically denigrate Comey’s character and professionalism, and was willing to undermine public trust in our law enforcement institutions for Hillary’s political objectives. That much we do know now, in time for it to factor into our decision on November 8.