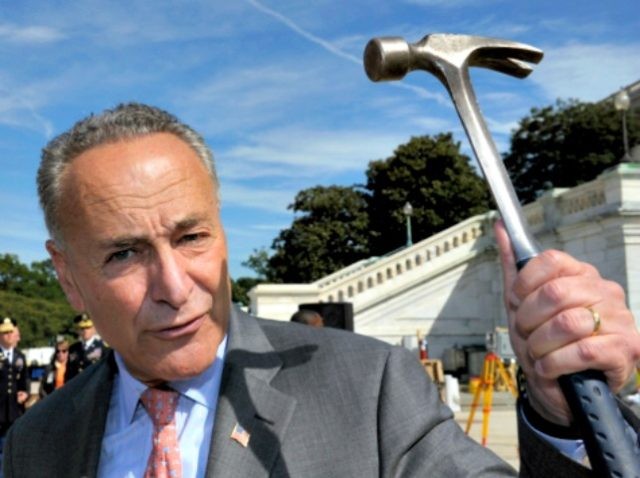 Luckily, the Senator was hammerless…

NY Senator Chuck Schumer, the Senate Minority Leader (who sure seemed like a nice, reasonable guy in my two brief encounters with him), apparently needs an intervention.

According to witnesses, Schumer became enraged this weekend when he encountered Joseph A. Califano Jr. (former U.S. Secretary of Health, Education and Welfare under President Carter)  and his wife, Hilary, having a quiet dinner at the stylish Upper East Side restaurant Sette Mezzo. Schumer, dining with friends, began shouting at the couple and Califano’s wife in particular, saying, “She voted for Trump!” The Califanos left the restaurant, and the distinguished Senator followed them outside, continuing to harass Hilary Califano, saying,  “ ‘How could you vote for Trump? He’s a liar!’

Mrs. Califano confirmed the account. “Sen. Schumer was really rude . . . I should have told him that Hillary Clinton was a liar, but I was so surprised I didn’t say anything.”

A spokesman for Schumer denies this occurred, saying, “[He] and his wife ate at the café on Sunday, engaging in unremarkable conversation with patrons who approached their table. There were no heated exchanges with ‎anyone.”

Once again, almost all “conservative” media reports that Schumer was ranting at Califano. No left-leaning media has covered the story at all (so far), except The Hill. How do we know what happened, with journalism rejecting objectivity? The mainstream media actively works to bury stories that don’t serve their agendas, while the other side habitually over-hypes. If we take the MSN’s silence for the truth, then the episode becomes “old news,” and is effectively muted.

I have to maneuver this disgusting swamp every day. In this case, I’m going with the New York Post Page Six account, first because it’s the local paper; second, because I find it hard to believe that any paper would try to manufacture an incident in a crowded restaurant; third, because Mrs. Califano confirmed it, and finally, because Democrats have been increasingly unhinged for months.

Update: when that post was written, no leftward mainstream media sources reported the incident, though it was unquestionable newsworthy. If Senator McCain or Mitch McConnell, and certainly Sarah Palin, had behaved this way, it would be on every front page and CNN would be leading with it every hour.  I noted that this was a perfect example of how the polarization of news sources works today; I also wondered if the story would ultimately be debunks or credibly denied. The story  hasn’t been debunked, and the Left’s media pals have ignored it. From now on, I think I’ll ask any desperate denier of news media bias try to explain this.

This is another episode of what Ethics Alarms has dubbed “The Hamilton Effect,” except that I, perhaps foolishly in this cultural climate, expect better behavior from U.S. Senators than from arrogant actors and obnoxious airplane passengers.  Califano and his wife have every right to have a pleasant, non-political dinner without being harassed and berated by anyone, especially their U.S. Senator. It’s not quite as bad as airplane ambushes, where their alternative is to parachute out, or a theater, but it’s bad enough.

This wasn’t just a breach of civility by Schumer, it was a breach of the Golden Rule, decency, common sense, and the dignity of his office, the Senate, and I would say his party, except that its post-election conduct,  of which Schumer’s is not atypical, has leached it of most of its dignity already. No American has any justification to berate any citizen for his or her vote or non-vote, and doing so in public, in a harassing manner, is uncivilized—unfair, disrespectful, indefensible. For a leader of the government to do this signals to those with weak ethical bearings that it is acceptable conduct, and it is not.

Final thoughts on a disturbing episode (if true):

1.  Does Schumer have an alcohol problem? I hope so: at least that would be an excuse for this. If he acts like this while in full commend of his senses, Democrats ought to shift the focus of their “he might be crazy” narrative to a different elected official.

2. Trump Derangement really is beginning to resemble rabies, or some other communicable disease. I would never have thought that Schumer would be capable of such conduct.

3. Any elected official of any party who acted like this would be an Incompetent Elected Official Of The Month on Ethics Alarms.

4. How can our government function when party leaders behave this way, and apparently think is acceptable to do so?

5. How can ordinary citizens be expected to treat each other with respect regardless of political orientation, when the professionals can’t control themselves?

6. Frequent readers know that I admire the cool, measured and original analysis of blogress Ann Althouse. Will someone please explain to me what this opinion, regarding this episode, means? (Note that Althouse apparently believes it took place)

Oh, come on. People aren’t aloud allowed to have vivid political conversations in a restaurant? I think it’s nice that Chuck Schumer displays his opinions and personality in full public view. If you don’t like hearing what other people say in restaurants, have your own exciting conversation, or eat somewhere else.