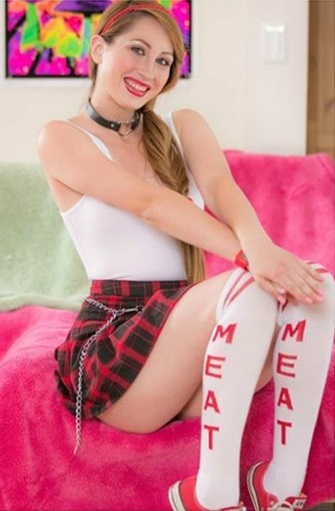 A secondary school teacher or administrator (or other role model for children) who allows pictures of himself or herself to be widely publicized, as on the web, showing the teacher naked or engaging in sexually provocative poses, cannot complain when he or she is dismissed by the school as a result.

Various discussions  f the NTP can be found here. [The original post on the topic is on the old Ethics Scoreboard, which is down at the moment thanks to an incompetent web hosting operation. It will be back soon, or there will be blood….]

Nina Skye is a preschool teacher at a religious school in Los Angeles and decided to go public—with Fox News, of all places—with her secret double life moonlighting in the adult film industry.

“I love teaching. I love sex. If I can get away with doing both, then I will,” Nina says. “I know what I’m doing when it comes to teaching, I’m a really good teacher.”  On the other hand, “It’s easy money. For my very first scene, I just did a regular boy on girl and I got paid $2,500 on the spot.”

Skye’s explanation about why she is revealing her passion at the risk of her teaching? “I guess some people are really tied by that moral code, ” she says.  “There’s a really big stigma associated with it, and how our society views it, but that’s not how I am… I’m really open-minded. Super open-minded and not judgemental.”

“They say it goes against the paper I signed, saying I wouldn’t do that,” she explained.

2. The school was being unusually reasonable to allow her to stay if she gave up having sex on camera for money.

4. Nina appears to be an idiot. She works at a religious institution. Religions make moral codes. Shrugging off morality in a published interview is asking to be fired.

5. Ah, but Nina is no idiot! Asking to be fired is exactly what she was doing. This was a publicity stunt designed to get more of her videos sold. Fox News was happy to help out, as was The Daily Caller, which finds an excuse to publish a sexually provocative photo just about every day as click-bait.

6. But wait! What evidence do we have that she is a teacher at all? The school has never been named, and all we have is the actress’s word that she was fired.

In either case, no school should trust her again, and neither should any other employer. And if she tries to teach 8th graders, the Naked Teacher Principle will apply.