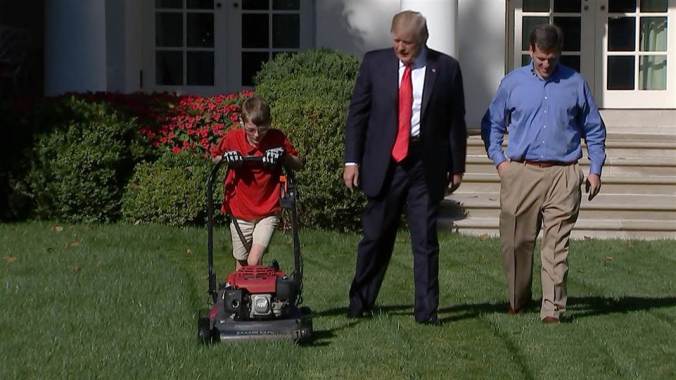 Sure it’s a political stunt, but it’s a nice stunt. In the long tradition of Presidents responding to letters and news stories involving children, this is one of the better ones. It is certainly better than the last example, President Obama making a hero out of “Clock Boy,” a kid who was seemingly being used as a propaganda tool by his Muslim activist father.

Frank Giaccio, of Falls Church, Virginia., had written to Trump earlier this year, saying it would be his “honor” to “mow the White House lawn some weekend for you.”  In the letter that White House press secretary Sarah Huckabee Sanders read the letter at a press briefing last month, Giaccio wrote that he would cut the grass “at no charge.”

Any President with two brain cells to rub together would take up an offer like that and have photographers ready when the kid came to work. Sure enough, a throng was on hand as Frank was seen mowing in the Rose Garden after the White House invited him to spend the morning alongside the groundskeeper at 1600 Pennsylvania Ave. Diligent to a fault, he initially wouldn’t even stop mowing when the President spoke to him. Finally, he paused long enough to shake President trump’s hand.

Lessons? The President was humanized: he didn’t try to eat him.  The episode shows that America’s youth are still industrious and ready to work. It shows that patriotism lives. It shows that the rising generation is full of normal kids that love America, at least until they have been indoctrinated otherwise by high school and college teachers, and popular culture. Who could possibly object to this heart-warming scene?

Oh, lots of people. After all, this is Donald Trump: he’s special.  It isn’t that he doesn’t do and say an amazing number of things that deserve criticism: he does. But the rule of the  resistance et al., including many journalists, is that if Trump does it, it is per se wrong, even if it would be fine if anyone else did it.  There are journalists working 24-7 to find something wrong with anything this President does…even giving a little boy a chance to serve his country.

Former New York Times labor reporter Steven Greenhouse won a pool or prize or something: he came up with a way to attack the White House for this. Greenhouse, a veteran reporter of the Times for 31 years—huh…the Times! Who would have thought?— tweeted,

After almost everyone with a keyboard and a conscience  jumped on him for this, he doubled down, tweeting,

“What this kid wants to do is noble, but sorry, I’m mindful of problems–I’ve written lots about child labor & kids being hurt by machinery.”

Moron. The kid has a lawn-mowing business. He was supervised. It was a single job. Wrote conservative Never Trumper Bill Kristol, correctly:

“The sanctimonious and humorless finger-wagging of nanny state progressivism in one tweet.”

I’m cross filing this under “The Anti-Trump Hate Virus,” “Journalist Bias,” “This is why Donald Trump is President,” “Flat Learning Curves,” and “When Ethics Alarms Don’t Ring.”

Now watch as Frank is harassed by his teachers in school, bullied by Dreamers, and begins getting death threats.

26 thoughts on “The Kid Mowing The White House Lawn”