The comments regarding yesterday’s ethics quiz have been varied and vigorous. As to the quiz question itself,

Is [Anthony] Rapp’s public accusation [against actor Kevin Spacey alleging that Spacey sexually assaulted him 30 years ago when Rapp was only 14] fair, responsible, and ethical?

I have arrived at my answer, and am abashed that I didn’t see it immediately.

No, the accusation was not fair, and it was unethical. It fails all ethical systems. It is a Golden Rule breach: What Rapp did to Spacey is not how he, or anyone would want to be treated. The fair and decent thing would have been to confront Spacey privately.  Maybe Rapp has distorted the incident over time; maybe Spacey is as remorseful and embarrassed by the incident as Rapp has been traumatized by it. All of us would want at least a chance to explain or make amends before being exposed…in Buzzfeed(!?).

Other observations, as Spacey is being metaphorically disemboweled by an angry mob…

This also fails any Millsian or Benthamist test of utilitarianism. The ends accomplished by Rapp’s accusation consist almost entirely of destroying Kevin Spacey. What else? I suppose its a warning too: anything you did that society will regard as worthy of making you a pariah can be revealed by an angry, vindictive or politically motivated alleged victim at any time, and you will have no recourse. Call it the Anita Hill Principle. That’s not enough of a “benefit” to society to destroy someone’s life. We have the Weinstein example, and the Bill Cosby saga. They were–are?—both serial offenders. Taking out Kevin Spacey based on one very old incident is not a means justified by any end. 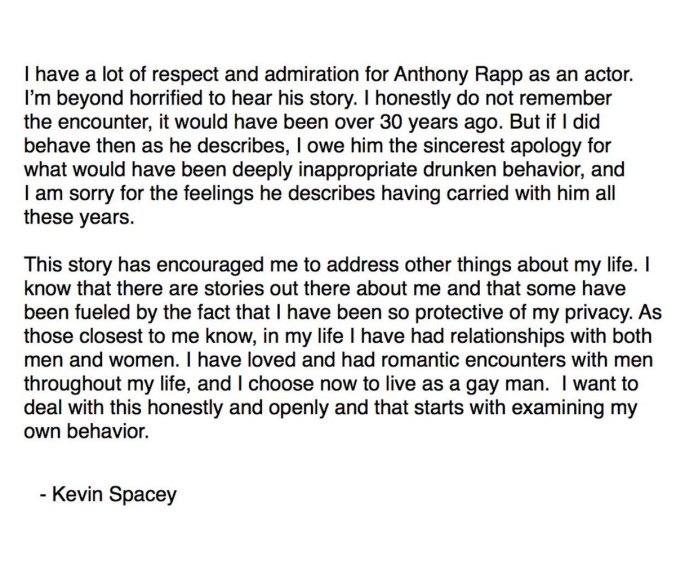 First, here we have another example of why Twitter is dangerous. Spacey is a smart guy, yet he foolishly, in his rush to deal with this crisis, authored his own rapid response on social media. In the old days, as my late friend Bob McElwaine, Hollywood publicist for Danny Kaye, Dean Martin, Robert Mitchum and many other stars, told me, he job was to make sure nothing attributed to his Hollywood clients was authored by them.

Second, the whateveritis is incoherent. It’s a conditional apology, which isn’t an apology at all: IF I did this, and I’m not saying I did, then I owe him an apology, though this isn’t it.

Third, calling a grown man sexual assaulting a child “inappropriate” is equivocation of the worst sort. It’s not inappropriate; it’s a crime.

Fourth, Spacey says he’s sorry for his alleged victim’s feelings, which is like saying he’s sorry Rapp has a nosebleed. Unless he accepts responsibility for Rapp having those feelings, “I’m sorry” is just a brush-off.

Well, I’m sure it seemed like a good strategy at the time. However, what it seemed to be to some audiences was an opportunistic playing of the gay card to gain support in the same LGTB community that he had, in its eyes, rejected and insulted by insisting that he was not a member. Not only that, however:

“Coming out is a painful, exhilarating moment of truth for every LGBT person and many if not most of us have approached it with incredible fear and even reverence. It’s about stating the truth of yourself in front of a world that seeks to oppose that truth. It’s the entire reason why we have PRIDE parades; not because we’re gay or bi or trans or queer, but because we had the strength to come out and say so. To state the truth of your orientation and desires is a beautiful moment that, quite frankly, most heterosexual or cisgender people simply cannot understand fully. It’s the moment you give birth to yourself.

And it’s a moment Kevin Spacey has spent decades avoiding and denying, even after the allegations and insinuations piled up to the point where it became undeniable. Spacey never once stated the truth of himself, preferring to obfuscate, if not outright lie; and when that became untenable, he switched over to making winking jokes on the matter, all while never once stating the truth.

And all of that? His choice. Truly. We don’t respect a man of his age and standing refusing to be open about who he is, but we respect his right to make that choice. But we vehemently reject the use of the standard celebrity coming-out announcement to distract from the fact that serious allegations have been made against him. Worse, the statement made it sound like feeling up 14-year-olds is just a thing that happens when gay men – pardon us, men who “choose to live as a gay man” –  get drunk.

In case there’s any confusion on this matter, please allow these two longstanding gay men to clear it up for you: Alcohol does not make gay men fondle teenage boys.

That one’s all on you, Kev. And fuck you for hiding behind the rainbow flag – the very one you ran screaming from for two decades – when your shit went public. You’re revolting. We have never once seen ourselves as people who speak on behalf of the LGBT community, but just this once, we’re gonna grab the mic and say, “Sit the fuck down, Kevin Spacey. We want no part of you.”

Well, nobody ever accused the gay community of not being vicious when provoked.