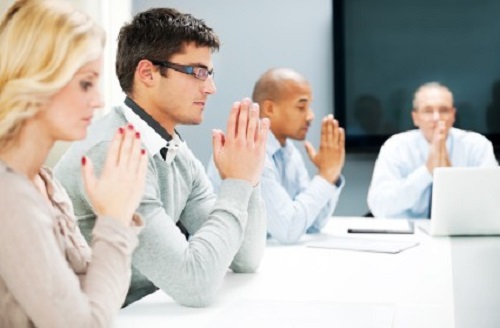 This question was asked of the New York Times’ “Workologist” (It’s stuff like this that keeps me subscribed despite the paper’s disgraceful partisan bias and unocnscionable manipulation of the news):

I recently had a manager ask me if I have “prayed about” a particular situation at the office… this statement crossed a personal line with me. I am very private about my religious life. Do you have any recommendations on how I could handle this?

The question immediately reminded me of “Breach,” the film about the capture of spy Robert Hannsen (Chris Cooper), who was always urging his clerk (actually the undercover FBO agent recruited to unmask him) to pray. The “Workologist” (Rob Walker) begins by pointing out the obvious: a boss can’t demand that you pray, or fire you for refusing to. Then he adds,

Your manager can’t discriminate against you on the basis of religion, but your company can’t discriminate against him, either — by, say, forbidding him to ever mention prayer. In general, companies are supposed to make an effort to accommodate the religious practices of employees, although this can be weighed against the potential burden on the employer…Faith-related workplace conflicts and litigation have become more common in recent years. So it might be better to think about this incident in the broader context of personal expression and identity…

your best move is to make your own boundaries clear — yet also try to avoid an outright conflict. The fact that you already consider him your “worst manager” might make that difficult. But simply declaring his question inappropriate or offensive won’t help.

Instead, try something like “Well, I’ve thought about it,” and either leave it there or, if that doesn’t seem to connect, add something like “But I’m not comfortable talking about what I do or don’t pray about.” This should be delivered in a friendly-to-neutral tone. You’re not making any judgments — and neither should he.

I find that approach cowardly and dishonest.

If you have prayed about it, the answer is “Yes, I have prayed about it.” If you do pray about such matters but haven’t, an ethical  answer is “Good idea. It certainly can’t hurt.” If you don’t pray, however, don’t believe in prayer, or don’t believe there is anyone or thing to pray to, saying “I’m not comfortable talking about what I do or don’t pray about” is deceitful, calculated to leave the impression there is something you pray about. Even “Thanks, but I don’t pray about such things” is misleading.

If you are afraid the boss will think less of you for not signalling that you sit in his pew, get over it, or find another job ASAP.  If your boss says, “Are you rooting for Duke in the Final Four? It’s my alma mater!” and you’re afraid to say, “Nope. I’m a Louisville fan; my father went to school there,” then you have a toxic workplace,ad you are on the road to Weenieville.

Do you want to guess what I would say to a boss who suggested that I should root for the Yankees? (Because I’ve said it!)

Any boss worthy of supervising me had better be able to respect me for being candid and telling him or her the truth. I would say to my prayer-pushing boss, “Thanks, but I believe we have to solve our problems, and be fully accountable for what happens. I don’t believe in prayer, but of course I respect anyone’s right to feel differently.”

Any further pressure on the issue would warrant a warning. Being a lawyer in such scenarios is a big help, I must admit.

22 thoughts on “Your Boss Asks If You Have Prayed About A Work-Related Matter…What Is The Ethical Response?”