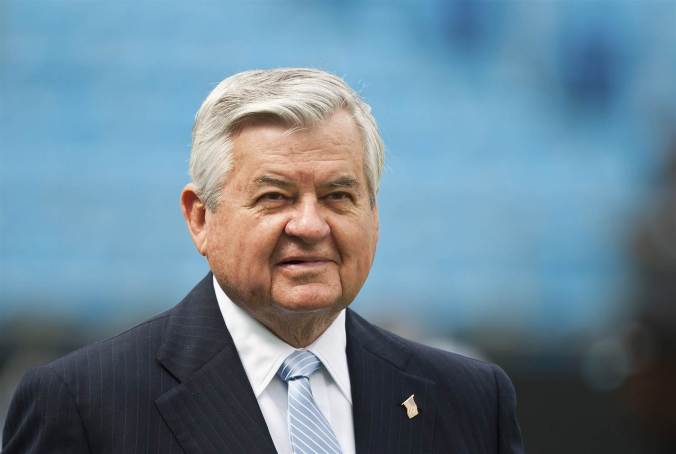 Jerry Richardson (above), the 81-year-old original owner of the Carolina Panthers in the NFL,  has decided that rather than ride out the sexual harassment allegations  recently reported  by Sports Illustrated, the wisest (and most lucrative course) will be to sell the team after this season. His profit will be somewhere in the billions, not that he isn’t a billionaire already.

“Here’s what would make more sense: For Richardson to announce that the proceeds of the sale — or even just a couple hundred million? — would be donated to the women he harassed…[Many men] have been chased from the top of their professions for disgusting behavior involving women they worked with. They are suddenly pariahs, their reputations destroyed. But they remain very rich men, and their families, for generations, will be able to live off the financial rewards they collected while perpetuating these offenses….Richardson, who made his fortune in the fast-food industry, might be the richest of all the men accused in the #MeToo movement so far. Perhaps it’s appropriate, in a legal sense, that he is able to sell his company and walk off the stage. But it doesn’t seem morally fair that he should benefit so richly from it.”

This is pure, unadulterated emotionalism and indignation unfiltered by thought or coherent societal values. If these are the kinds of ethical arguments—and it is an ethical argument–major information sources are going to publish as worthy of being injected into public discourse, we might as well tear up the laws, forswear ethical systems, embrace passion, anger, vengeance and the rest as our sole tools to govern human affairs, and resign ourselves to chaos.

Let’s ignore the fact that the accusations against Richardson remain allegations only. That means all of Macur’s fury are based on the fatuous Kirsten Powers Principle: “Due process is for the courts!” As ugly as the accounts in Sports Illustrated are, they have not been proven, Richardson has not had the chance to offer alternative versions of the episodes involved or to defend himself, and all of Masur’s edicts are based on the biased, deliberately fantastic and intellectually dishonest feminist tenet that women always are as true and accurate, fair and reliable, trustworthy and devoid of confounding influences as an atomic clock when the accuse a man of sexual misconduct. Yeah, tell it to Brian Banks, Juliet. To say this is dangerous nonsense is a dire insult to dangerous nonsense. But as I said, lets ignore that fatal flaw in her column, and assume everything alleged about Richardson is true because women say it is.

That still leaves us with her goo-goo, ga-ga, mouth-breathing concept of justice, which is a viral mutation especially ascendant among progressives these days, as well as kindergartners , religious fanatics, and the incurably self-righteous. This is, to be brief, that people who do bad things should not have any rights at all, and that they should be driven into the wilderness with sticks and fire after forfeiting their worldly possessions to the good people, like anyone they have wronged or who say they have wronged, minorities, the poor, women, and Masur.

My candidates for the most ignorant, thought-free sentence published in the U.S. this year by a major news source would include this gem: “Perhaps it’s appropriate, in a legal sense, that he is able to sell his company and walk off the stage. But it doesn’t seem morally fair that he should benefit so richly from it.” As Erin Brockavich (Julia Roberts) says to Ed Masry (Albert Finney), “Don’t use big words you don’t understand.”  Morals are based on codes and moral edicts are by definition handed down by an authority. In this society, our code is the law, created according to our society’s norms. Under what moral code does fairness demand that a cannot profit from selling his own property? Not the Ten Commandments: there’s also nothing in there about “having committed sexual harassment forfeits your right to property.” Not Sharia Law: don’t get me started on that moral code’s sense of fairness. Then what? What is Masur alluding to? Let me rephrase that: what the HELL is she alluding to? Oh, she doesn’t know; she’s just blathering. She’s mad, and she’s a woman, so hear her roar, even though roaring is not articulate or enlightening.

Back to Juliet after that musical interlude…

“His career shows how abusing women hardly prevents some men from becoming fabulously wealthy and celebrated businessmen in male-dominated domains like Hollywood, restaurants and sports,'” she writes, stating an unalterable fact of life as if she just discovered it. I hope this isn’t too hard for you to grasp in your current state, Juliet, but virtually all successful men and women do bad things unrelated to the things that made them successful, because more avoidance of bad conduct does not, by itself, guarantee success. I know this drives some progressives crazy: it’s so unfair that talented, hard-working, brilliant, risk-taking people who also are greedy, selfish and mean as well as lucky succeed when so many good, virtuous, nice, unlucky  people don’t. That’s not morally fair! What are we going to do about that?

Well, that’s what laws are for, Juliet. I hope this isn’t coming at you too fast. Laws and various systems of compensation and punishment lay out what society believes are just consequences for various kinds of misconduct and how those consequences are arrived at and managed, based on ancient ethical principles like proportion, process, openness, impartiality, proportionality, consistency and equity. The Masur theory, or “I’m do damn angry at all these harassing men that I think we should just take away what they have built and earned and give it to their victims, so there!” not only won’t work, it’s unethical, it’s unjust, it’s based on pure emotionalism, and it’s insane.

Opinion pieces like this just make ignorant people who don’t know how to address ethical problems even more confused and irrational than then already are. I know its thesis supports the Democrat’s embarrassing Plan J to undo the 2016 election—“Donald Trump has harassed women in the past so he doesn’t deserve to stay President and has to resign”—but newspapers exist to make the public better informed and smarter, not the opposite.

37 thoughts on “I’m Curious: Do Women—Any Women, A Lot Of Women, Adult Women, Rational Women—Think This Times Column Makes Sense? (Because It Doesn’t)”