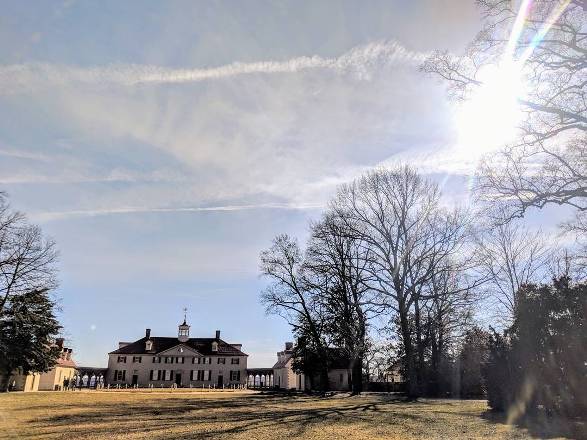 1 The Indispensable Man...This is George Washington’s birthday, and every American alive and dead owes him an unmatched debt of gratitude. A useful assessment of why this is true can be found here.

Not only was Washington indispensable as the military leader who won the Revolution, he was also, it seems likely, the only human being who could have navigated the impossibly difficult job of being the first President of a new nation attempting an unprecedented experiment in democracy. The precedents he set by his remarkable judgment, presence, wisdom, character and restraint continue to be a force today. Washington was also perhaps the most ethical man who has ever been President. The principles that guided him from his youth and that resulted in his being the only man trusted by the brilliant but often ruthless Founders who chose him to lead their new country can be reviewed here, but two of them tell us what we need to know about Washington’s ideals…the first,

Every action done in company ought to be with some sign of respect to those that are present.

Labor to keep alive in your breast that little spark of celestial fire called conscience.

Revoltingly, the average American is largely ignorant regarding the great man whose face adorns the one dollar bill. For example,  a recent YouGov survey asked respondents who was the best President in U.S. history. 16% of Americans selected Ronald Reagan, and 16% selected Barack Obama. Abraham Lincoln took third place with 15%. Washington finished fourth,but only 10% of those surveyed named him as the best President,  14 percent of Republicans, and only six percent of Democrats. I assume that Reagan, and I hope even Obama, would find these results ridiculous. They tell us that citizens can not distinguish politics from virtue. They tell us that the schools teach neither history nor critical thought effectively. They tell us that Democrats regard the fact that Washington was a slaveholder more notable than the fact that he made the United States possible. They tell us that the nation is losing a connection to its origins, heroes and values. It tells us that most of the public is ignorant of things that competent citizens must know.

It tells me that when an advocate cites a poll that says, “Americans want this,” the proper response is “Why should anyone trust their judgment? They think Regan and Obama were better Presidents than George Washington.”

2. Children’s Crusade update: Both CNN and HLN are flogging the high school student protests virtually to the exclusion of any thing else. The total commitment to aggressive and emotional advocacy on the part of the mainstream news media was disgraceful after the Sandy Hook school shooting, but this is worse; just when I think our journalism has hit the bottom, it finds a way to go lower.

This morning on HLN, I was greeted by an extremely articulate Marjory Stoneman Douglas High School survivor who said,  confidently and radiating certitude, “These episodes are completely preventable.” Putting such nonsense on the air, even when spoken by an attractive, sympathetic, youthful idealist who perhaps cannot be blamed for not knowing what the hell she’s talking about,is irresponsible and incompetent. It is no different from saying “The Holocaust never happened,” Barack Obama was born in Kenya” or “The world is ruled by the Illuminati.” “These episodes are completely preventable” is, from the mouth of anyone qualified to be on television talking about gun policy, a lie, and from someone like this young woman, as naive as professing a belief in Santa Claus. Such statements should not be presented in a news forum as a substantive or serious position. A news organization has an ethical obligation either to correct the misinformation, or not to broadcast it without context, like “Here is the kind of arguments these child activists are making, making serious and coherent debate impossible.”

When the crawl across the bottom of my screen added another argument from one of the activist students—has there ever been a time when the policy analysis of people lacking high school diplomas has ever been given so much media attention and credibility?—that read, “Student protester: “People are buying guns who don’t need them,” I switched to the Cartoon Network

3.  And yet he’s a brilliant lawyer! And a terrific dog-walker! “PITTSBURGH (KDKA) – A prominent Pittsburgh attorney has been charged with dozens of counts of sexually abusing his dog. According to a police report, witnesses say they heard Ivan DeVoren engaging in sexual activities with his dog, Snoopy, on several different occasions. Witnesses described hearing sex sounds coming from DeVoren’s apartment on numerous occasions. They kept records of the alleged incidents, including sounds of a dog whimpering, creaking furniture and inappropriate language”….Back in 2014, DeVoren spent five months volunteering at Humane Animal Rescue as a dog walker….”

“looks like an Ick Factor case to me. The abuse of poor Snoopy is so viscerally repulsive that the bar and the courts can’t keep their ethical priorities in order. It is also, as particularly ugly discipline cases often are, a matter of public relations and self-preservation for the legal profession. The bar association knows that not banning a lawyer like Pastor—one hopes there aren’t many–signals to the public that the bar welcomes brilliant advocates who may be monsters in their spare time. That is a dark and dangerous road the profession would rather avoid.”

DeVoren is a prominent environmental lawyer

4. Coming to Ethics Alarms soon: I was going to include a discussion of last night’s horrific CNN town meeting regarding gun control in the Warm-up, but it needs a free-standing post. This was one more example of signature significance for American journalism having abandoned all professional standards.

5. Finally, an everyday ethics complaint: For the second time in three months, an obligation by a contractor has been delayed to the point of hardship for us with the excuse offered that “there was a death in my family.” These were not 24 hour delays, but delays of many days. It is supposed to be compassionate and good manners to just nod at this, and accept whatever time schedule the mourning individual requests or, in most cases, just imposes.

This is unethical and unprofessional. I’ve had many deaths to deal with, and never imposed on my business and professional relationships for more than a single day. “Sorry, I didn’t get around to mailing you that large check that is weeks overdue because there was a death ion my family” is not an acceptable explanation. You don’t have a right to make your problem my problem. I’ve got enough. problems of my own,