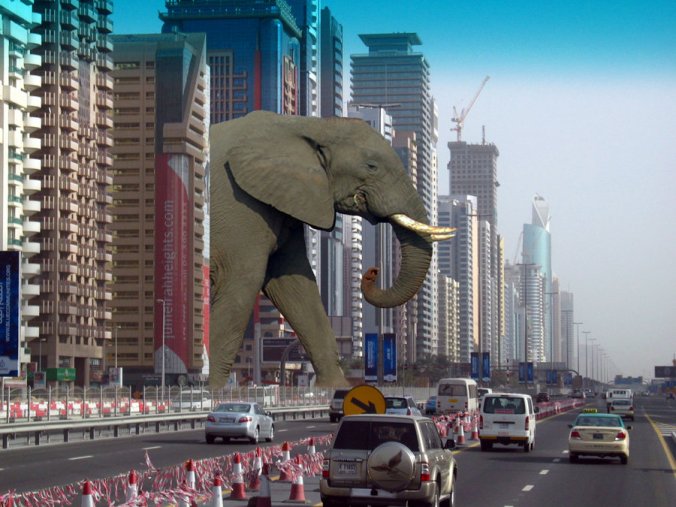 The fact that MSNBC continues to employ Joy Reid, so unethical in so many ways,  would be sufficient all by itself to justify never trusting the network. Just in case her racebaiting, bias and hate-mongering weren’t enough, however, now she has issued a mind-blowing Jumbo of such magnitude and audacity that it is impossible to deny that either she is willing to lie about anything, or in the alternative, is nuts. There do not seem to be any other explanations.

On Ethics Alarms, a Jumbo is the term for a desperate, ridiculous lie that insults the intelligence of all who hear it. The term comes from name of the elephant Jimmy Durante was trying to sneak out of the circus in Billy Rose’s eponymous Broadway extravaganza “Jumbo,” when he was stopped by a sheriff, in the show’s most famous moment. “Where are you going with that elephant?” demanded The Law. “Elephant? What elephant?” answered the Schnozzola, innocently. But Reid’s Jumbo out-Jumbos Jimmy.

It all began last December, when some homophobic posts on Reid’s old blog surfaced. Then she issued a self-contradictory apology, flagged in this Ethics Alarms entry. but it turned out that there were more such posts to be found. Six days ago, the media site Mediaite uncovered more posts by Reid that were critical of homosexuality and gays, from The Reid Report, a now defunct blog that Reid authored long before she became a warrior of “the resistance.”  They were originally tracked down and shared on Twitter by sleuth Jamie Maz, who found them using the internet archiving service, the Wayback Machine, which takes screenshots of frequently trafficked web pages to preserve them. Reid’s response was to deny that she wrote the posts:

“In December I learned that an unknown, external party accessed and manipulated material from my now-defunct blog, The Reid Report, to include offensive and hateful references that are fabricated and run counter to my personal beliefs and ideology.

I began working with a cyber-security expert who first identified the unauthorized activity, and we notified federal law enforcement officials of the breach. The manipulated material seems to be part of an effort to taint my character with false information by distorting a blog that ended a decade ago.

Now that the site has been compromised I can state unequivocally that it does not represent the original entries. I hope that whoever corrupted the site recognizes the pain they have caused, not just to me, but to my family and communities that I care deeply about: LGBTQ, immigrants, people of color and other marginalized groups.”

To be blunt but accurate, she was lying.

As several commentators pointed out, this bizarre conspiracy theory requires one to accept that before either Barack Obama or Hillary Clinton changed their positions on gay marriage, and before Reid was a TV pundit that depended keeping her audience  happy through  complete fealty to all positions progressive, some evil genius had the foresight to alter her blog to represent her as homophobic. It is similar to the claims of birthers who insist that Barack Obama’s “fake” birth announcement in a Honolulu paper was planted there, or O.J.’s defense team’s (successful!) argument that the police planted blood in O.J’s car and home before they could possibly know whether he was a plausible suspect.

Reid’s public lie quickly fell apart, though she even went to the extent of having her lawyer confirm that the FBI was investigating “potential criminal activities surrounding several online accounts” belonging to Reid. Multiple experts concluded that what Reid was claiming is impossible. Her blog had not been hacked. Now she was caught in her blatant  lie,  and indeed it might be a criminal one, since she was prompting an FBI investigation with a falsehood.

So what did Reid do? Did she come clean and admit that the posts were as they appeared to be? No! Did she do the honorable and mature thing, and say that she had learned a great deal since publicizing those now politically-incorrect opinions, like the one where she wrote that she didn’t like to see men kissing, and was avoiding “Brokeback Mountain” because it would nauseate her? No! This would be especially difficult for someone like Reid, who practices the Unprincipled Left’s practice of demanding current condemnation, and no mercy, for conservative figures who uttered unacceptable sentiments before they were famous and powerful. For the Unforgiving Left, bigotry is forever (unless it’s Antisemitism), sexism is forever (unless you are Bill Clinton), sexual harassment is forever (unless you are Joe Biden), and anti-gay sentiments are forever (unless you are Barack Obama). So, taking her cue from Jimmy, Joy Reid said this yesterday on her show, AM Joy:

“Here’s what I know: I genuinely do not believe I wrote those hateful things. But I can definitely understand, based on things I have said and have written in the past, that some people don’t believe me.”

That’s right. The posts were on her blog, which she, and only she, wrote.  Her claims that the screen shots were false and that the blog contents were hacked were decisively debunked. Nevertheless, Joy Reid says she “genuinely” does not believe that she wrote them!

This is easily as outrageous as pretending that you aren’t aware of the biggest elephant in the world that you have on the end of a short rope, but it’s not nearly as funny. Millions of Americans turn to Reid, in their blind hatred of their own nation’s elected leader, for analysis and guidance, and now she is either willing to state that what she knows to be true isn’t when it suits her needs, or she is delusional. Either state renders her unfit to be employed by a news organization. I’m not sure there is an occupation where an employer could responsibly excuse either malady at this high level. (In “Jumbo,” Jimmy was a circus clown.)

As often is the case, the bright side of this depressing example of an ideological shill exposing his or her trustworthiness deficit is that we now have an effective integrity test. Your friends who react to this episode by saying, in essence, “I don’t care; I like what she says!” are lost utterly. So is MSNBC, if it doesn’t have the integrity to send an emphatic message that “we don’t give liars their own TV shows” (well, except for Al Sharpton)….but MSNBC was lost a long, long time ago.

Here’s an example of how the Joy Reid Jumbo Integrity Test works: Eric Holder, who says he might run for President, tweeted,

“Joy Ann Reid apology. Appropriate. Heartfelt. This unique and compelling voice for tolerance and equality should not be silenced. We learn – and change – from our mistakes. She has.”

What?? You don’t apologize by denying that what you are apologizing for happened. Appropriate? How is it ever appropriate to react like this after one lie doesn’t work—by using an even bigger, more desperate lie? Heartfelt? If Reid really does believe she didn’t write what she wrote and even the Library of Congress confirms what she wrote, then she is bonkers.

I guess that’s kind of unique for a pundit, though not really. And how does denying that a mistake occurred equal “learning and changing”?

Of course, Holder, himself a liar and a race-baiter, was a walking, talking integrity test while leading the Justice Department. If President Obama had integrity, he would have fired this hack.

In the end, this episode tells us all anyone should need to know about Joy Reid. Delusional or someone who would deny what anyone can see to rescue herself, she is unfit to have a platform with which to spread her dishonesty and incompetence

The only question now is, should I rename the Jumbo, “the Joy”?

18 thoughts on “Wow! MSNBC’s Joy Reid May Have Given Us The Biggest Jumbo Ever!”