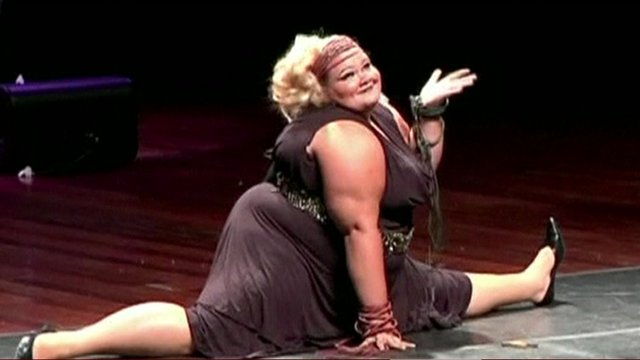 Now, don’t get me wrong: I believe the Miss America Pageant should have been euthanized decades ago. An  anachronism from the heyday of the Atlantic City Boardwalk, the beauty pageant seemed clunky, demeaning and embarrassing when I was a kid, when we had to watch the smarmy Bert Parks sing “There she is, Miss America!” while the winner’s tears washed her make-up down her cheeks. The talent competition was ridiculous; the answers to the judges’ questions were beyond parody. The women, however, did look smashing in their gowns and swimsuits. At least that was something.

But it was essentially a meat show, as my college roommate indelicately put it. The Miss USA and Miss World contestants were hotter, if dumber, and I always felt embarrassed for those women too. And don’t get me started on the Miss Teenage America pageant.

If you are going to have a Miss America Pageant, however, then you have it, and accept the fact that it’s wince-producing. If you don’t want to have such an event any more, then you kill it, that’s it. You don’t suddenly announce, “From today on, the Miss America Pageant is a trout fishing contest!” Isn’t that obvious?

The organization cleaned house last year after former CEO Sam Haskell and other board members were found to have made sexist and generally oogy comments about  the physical appearance, intellect, and personal lives of pageant participants.  Everyone was shocked–shocked!—to discover this. Imagine: middle-aged heterosexual men running a beauty pageant actually had impure thoughts about the women involved! Who would have seen that coming? Freaks!

The response of the organization was to signal its virtue, make amends, and hire a replacement for Haskell with an agenda and biases completely antithetical to the entire concept of a beauty show. That would be Gretchen Carlson, a former winner of the tiara but more importantly the Fox Blonde who blew the whistle that ultimately exposed Roger Aisles as a sexist pig, and Fox News as a brutal hostile work environment for any female more attractive than Greta Van Susteren. Despite being perfectly happy to ride her own swimsuit triumph to a six-figure job at the news network most notoriously  interested in pulchritude for its distaff hires, Carlson has become a Miss with a mission. No more ogling! No more lookism!

“We are no longer a pageant,” Carlson told Good Morning America on Tuesday. “We are a competition.”

A competition of what? She says that Miss America will no longer judge women based on their physical appearance. But this is, and has always been, a beauty pageant. If beauty doesn’t matter, what will? Does Carlson really think there is any competition involving old, fat and homely women that will attract an audience? If the Miss America Whatever It Is doesn’t require beautiful women, why can’t men enter? If you take the female form out of the equation, isn’t limiting the contestants to woman pure discrimination? Men can sing, dance and answer pompous questions about world peace as well as women can.

What the organization did in hiring Carlson is the most incompetent decision any organization can make: choosing a leader who does not embrace the values, mission and traditions of the organization she is being asked to lead. This is like hiring a Commissioner of Baseball who announces, “From now on, we’re playing soccer.” If I wanted to be mean, I would say that this is like electing Barack Obama President, but that would be unfair. A bit. It is more like Ford Motor Co, hiring a CEO who declares, “We’re a bicycle company!” Or the NRA choosing David Hogg as its President.

The Miss America Pageant is dead, and its executives should admit it.  Hiring a leader who is dedicated to killing the thing makes no sense.