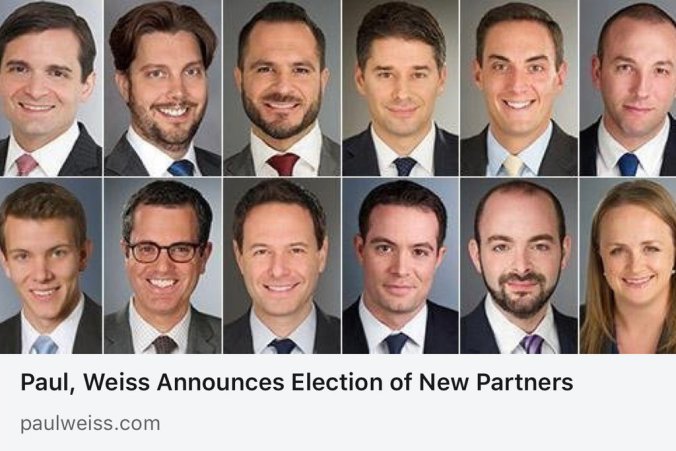 In early December of last year, Paul, Weiss, one of the country’s largest and richest firms, announced its new partners: twelve young white lawyers, and one similarly hued woman.

Being that group identification is everything to certain well-placed people today, the announcement became an instant “public relations nightmare,” according to many media accounts. Sensitive to being sufficiently “woke,” many large companies had their  general counsels, sign an open letter  calling on law firms firms  “to reflect the diversity of the legal community” or they would send their business elsewhere.

What is the assumption underlying that letter? Is it that whites were chosen over better qualified minority lawyers as an act of bigotry and racism? Noooo, nobody’s suggesting that. Are the signatories to the letter really saying that less qualified lawyers of color should be advanced rather than these lawyers? It can’t be that, can it? I would say that a law firm that does not make every effort to have the very best lawyers available for the benefit of the clients is treading close to unethical behavior. A firm can’t prioritize diversity, whatever than means, over its own abilities to represent clients.

I nearly dropped Above the Law, but the reliably knee-jerk left and ethically obtuse online rag is great for these stories, and didn’t disappoint this time. Joe Patrice, the editor, wrote,

It’s not that firms intentionally want their letterhead to feature more white dudes than a Jimmy Buffett concert. Very few law firms set out to cultivate a class bereft of diversity. Rather, they lack imagination and mindlessly hew to a model that grinds most candidates out of the process before it ever reaches this point. Diverse candidates are subtly shunted off into auxiliary roles — counselships or whatever sanitized terminology the firm uses. Implicit biases consistently drive down minority candidate reviews. Women are held back for deigning to have kids. And corporate America’s relatively more progressive hiring poaches quality diverse candidates to the in-house ranks. This isn’t a problem that gets solved the day the firm votes on new partners, it needs to be addressed on the day first-year associates start. But worse than the firm’s failure to find and nurture diverse candidates for partnership, is the naked lack of awareness involved in putting that picture out into the world as a press release. When the resulting image looks like this, someone, somewhere along the line needs to show a modicum of awareness and say, “oof, maybe let’s not put pictures with this one.” The post evinces a complete failure to recognize what’s happening.

He then goes on to criticize the firm for putting the woman’s photo last, because her name came last in the alphabet.

I’ve noted that Harvard’s admissions office uses all sorts of imaginative ways to exclude Asians from its student omissions. Is that the kind of think Joe is talking about? “Come on, you’re lawyers. You can up with ways to discriminate on the basis of race and ethnicity without getting caught”? Of course it is. If he’s saying that these were not the best qualified associates to make partner, thus proving that the firm is sexist and racist, then prove it. Since I know big law firms are almost entirely dedicated to making money, and would hire the best lawyers they could find if they were giant talking slugs, I think the burden of proof here is daunting. No, what he’s saying is “surely there is some voodoo ranking system that will ensure more blacks and Hispanics, because in 2019 America, it’s skin color and gender first.”

Here, for the record, is the mea culpa issued by the firm:

We certainly can—and will—do better. I regret the gender and racial imbalance in our newly elected partnership class (one woman, one Latino, one LGBTQ partner, only 25 percent diverse), which resulted from an idiosyncratic demographic pool and which I can assure you will not be repeated.

Our percentage of female, African-American and LGBTQ partners and associates greatly exceeds the average for New York and U.S. law firms. It would be unfortunate and disappointing if an idiosyncratic demographic pool in one particular year would erase the firm’s diversity achievements over the past 75 years.

Wait, diversity is the most important issue for a law firm and its leadership? Where’s that in the ethics rules? Their #1 priority is supposed to be practicing law well enough top justify such a firm’s obscene fees, not making Joe Patrice happy.

It sounds to me like what the critics of Paul, Weiss want an approach akin to this one, explained by Chloe Angyal, deputy opinion editor of The Huffington Post, in a series of tweets last week March:

Month two of @HuffPost Opinion is almost done. This month we published: 63% women, inc. trans women; 53% writers of colour.Our goals for this month were: less than 50% white authors (check!), Asian representation that matches or exceeds the US population (check!), more trans and non-binary authors (check, but I want to do better).We also wanted to raise Latinx representation to match or exceed the US population. We didn’t achieve that goal, but we’re moving firmly in the right direction.I check our numbers at the end of every week, because it’s easy to lose track or imagine you’re doing better than you really are, and the numbers don’t lie… (The numbers also don’t tell the whole story — about disability, geography, socioeconomics and more).But the work is not onerous and it’s definitely not impossible. If we can do it, every other opinion page can do it, too.And if you have an oped to pitch, here’s how you can do that. We pay, we edit with care and we are anti-Oxford comma.

In the post about this, I opined that Chloe is a bigot. (She was just fired in the recent HuffPo reorganization.) I doubt that the law firm’s management are bigots; they are just weenies who don’t have the guts and integrity to say, “These were the best and most qualified lawyers available, and we stand by our new partners and the process by which they were selected. There are no quotas on excellent lawyers here.”