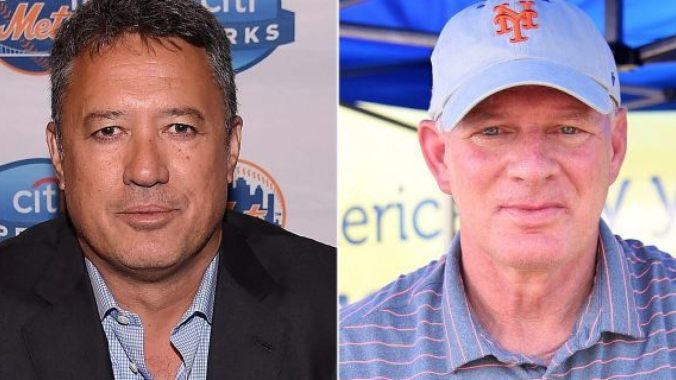 It pains me to have to write this; after all, the 1986 World Series, best remembered for the  potential Series-winning game the Red Sox choked away for good when the ball rolled under Bill Buckner’s legs (it wasn’t Bill fault, but never mind), is one of the traumas of my life. That was a thoroughly dislikable (but great) Mets team that won in 1986, and centerfielder Lenny Dykstra was the worst of them.  Still, the perfidy, venality and cruelty of another member of that team requires me to take Lenny’s side.

Dykstra was an obnoxious player and has been in constant trouble since his retirement. In a new book released this week, “108 Stitches: Loose Threads, Ripping Yarns, and the Darndest Characters from My Time in the Game,”  Dykstra’s team mate, turned broadcaster Ron Darling  (he’s on the left above, Lenny’s on the right) claims that Dykstra used racial epithets to unsettle Boston Red Sox pitcher Oil Can Boyd, an African American, before Game #3 of the 1986 World Series. Darling has now  repeated the accusation on three radio shows this week, as he wrote that Dykstra was “shouting every imaginable and unimaginable insult and expletive in his [Boyd’s] direction — foul, racist, hateful, hurtful stuff” when he was in the on-deck circle before leading off the game.

Dykstra denies it vehemently , Boyd says he never heard any slurs, and so far, at least, other ex-Mets Dwight Gooden, Kevin Mitchell and Darryl Strawberry also say they never heard Dykstra direct the slurs at Boyd, and none have confirmed Darling’s claim.

I’m sure the crude and boorish Dykstra was a major league jerk  to have to be around in 1986, especially for a squeaky clean Yalie like Darling, but the guy is trying to rebuild his life. Unlike Darling, Dykstra is broke. In  2011, he was sentenced to house arrest after a bankruptcy fraud indictment, was indicted for drug possession and grand theft auto,  and was jailed awaiting trial because he couldn’t post the $500,000 bail. He also couldn’t afford a lawyer, and had to make do with a public defender. Lenny pleaded no contest to three grand theft auto charges and one count of filing a false financial report in 2012. He spent almost three years in prison.

Now he’s a chastened old man, trying to survive. Being labeled a racist in public is one more burden he doesn’t need, especially when the Angry Left will generate a campaign to destroy anyone it deems unfit to exist in 2019. It is despicable, and truly kicking a man while he’s down, for Darling to strike at his struggling ex-team mate just to sell his book, and especially so if nobody but Darling was aware of Dykstra’s alleged efforts to denigrate Boyd. If a racial slur falls in a ballpark 40 years ago and nobody hears it but Ron Darling, did it really fall?