Ethics Alarms does not endorse any organized boycott efforts against any product, business or organization. However, if any corporation is begging to be boycotted, it’s Starbucks…

In case you missed it:

On July 4th, six Tempe, Arizona police officers visited a local Starbucks to get some coffee. The officers paid for their beverages and stood together, sipping coffee and chatting. A barista approached one of the officers, whom she apparently knew by name because he is was a frequent customer, and informed him that a customer  currently in the store “did not feel safe” because of the police presence. She asked the officers to move out of the customer’s line of sight (!) or to leave entirely.

This treatment of public safety workers could not be more disheartening. While the barista was polite, making such a request at all was offensive. Unfortunately, such treatment has become all too common in 2019. We know this is not a national policy at Starbucks Corporate and we look forward to working collaboratively with them on this important dialogue.

The Tempe Police put out their own statement: 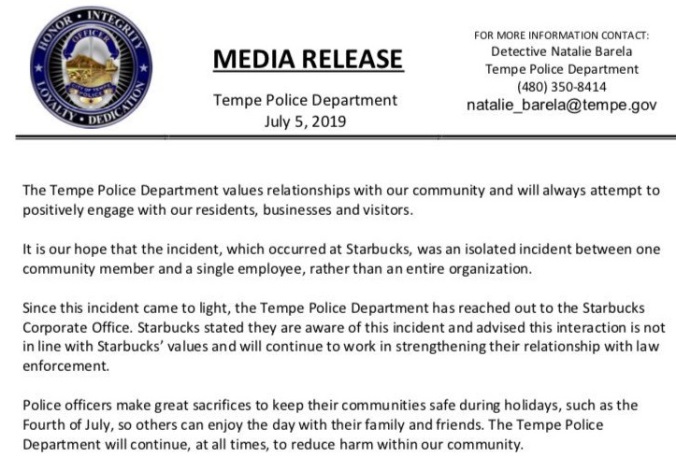 Starbucks, proving at least that it has not completely lost its mind, quickly apologized to the  Department, with a representative meeting with the police chief.  The statement:

“When those officers entered the store and a customer raised a concern over their presence, they should have been welcomed and treated with dignity and the utmost respect by our partners (employees). Instead, they were made to feel unwelcome and disrespected, which is completely unacceptable,”

1. In response to the incident, the hashtag #DumpStarbucks began trending on Starbucks and Twitter. I do not like organized boycotts, but I personally will not go into another Starbuck’s store as I travel wound the country, nor will I buy their Keurig-style coffee pods, even when they are on sale. Starbucks is just a different manifestation of the phenomenon that has Ethics Alarms banned from Facebook: it is another company that is abusing its popularity and power to engage in forced social engineering and manipulation of public opinion.

2. At Starbucks, this comes from its presumptuous CEO Howard Schultz and his addiction to virtue signaling, as well as his ignorance regarding what American virtues are. It is not surprising that his young and callow employees misunderstand the message, and behave in destructive and stupid ways. The line on conservative media is “Go Woke, Go Broke.” Unfortunately, it doesn’t always work out that way (Nike’s stock has increased in value since it declared the American flag racist), but it should work out that way.

3. A national company should be neither woke nor un-woke, unless politics and social issues are its business. Every American should feel welcome to be served or to purchase products, and not feel that only customers with certain beliefs are welcome. Starbucks is guilty of selling politics and ideology with its coffee. It is an excellent candidate for having its metaphorical head put on a metaphorical pike and left to rot in the metaphorical town square.

4. After the barista is fired, someone should interview (him? her?) and ask where in the world (he? she?) got the idea that one customer could demand that another  leave because the offending customer caused the complaining one to feel unsafe. Would she have done the same for a white woman who was made to feel unsafe by a black customer, or a male? Was it college, or the community, or leaders of the Democratic party telling supporters to harass Republicans in public places that rotted her values and common sense? Or was it the culture at Starbucks itself?

5. Lest we forget, at a Palo Alto Starbucks in April, Starbucks customers and baristas allowed man wearing a red Make America Great Again to be run out of a store by a vicious “resistance” harasser. In the post about that episode, I wrote in part,

I want to see Howard Schultz asked why his employees at the Starbucks didn’t protect and defend their customer. Similarly, why didn’t other customers confront [the harassing customer] as she was abusing the man? I would have, because that’s what my father taught me to do in these situations, but I assume most–many–some Americans still believe in the community’s duty to stand up for the mistreated and oppressed. Or would Howard’s rich little caffeine addicts also have sat silently while brownshirts harassed a Jewish man?

These observations apply with equal legitimacy to the Tempe incident.

6. When I write on Facebook about these kind of issues, an old friend who has unfortunately been permanently crippled by a career in Democratic politics inevitably says, “Why do you always blame progressives and Democrats for such things?” Why? Because this episode could not and would not have happened, indeed would not have been conceivable, until the various component institutions of the progressive movement successfully poisoned the culture with the ideas, fertilized by political correctness,  that

Who else but progressives and Democrats are responsible for this? Yes, I hold the left side of the spectrum absolutely responsible. It is destructive to society, and the ideological Left is accountable. I am sick and depressed at the degree of wilful ignorance and complicity in the indefensible by progressives and Democrats who have previously indicated that they were civilized, fair and responsible. Clearly, they are no longer.

7. Boy, the company should seek its money back from whatever the compliance  firm was that Starbucks used when it  closed thousands of its stores last year for anti-bias training. This was ordered after the explosive Philadelphia incident when police were called to remove two black men who refused to buy any Starbucks products while waiting to have a meeting. I guess the training was only about abusing and mistreating minority customers, right? The lessons didn’t apply to, say, police officers and supporters of the President? Of course not.

8. Tempe’s police should be praised for defusing the incident by quietly leaving without objecting (as, for example, I would have done) I cannot imagine a similar reaction in New York, Chicago, or my home town of  Boston, Massachusetts.

9. On the other hand, to quote “Fargo,” I’m not sure that I agree with you a hundred percent on your policework there…” If a customer is made nervous by the police, wouldn’t that warrant a bit of investigation?

39 thoughts on “Ethics Observation On The Tempe, Arizona Starbucks Incident”