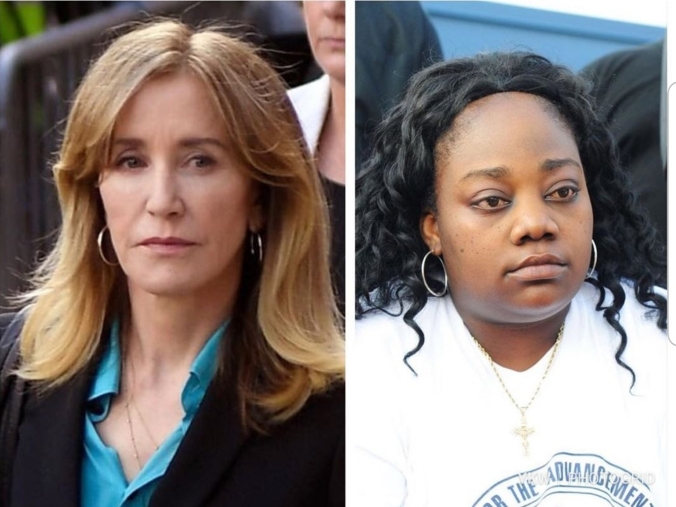 Before actress Felicity Huffman was sentenced for her participation in the rigged college admissions scandal, also known as “Varsity Blues”, the leftist website Salon had already pronounced her treatment by the justice system as racist. It said in part,

Back in 2011 Tanya McDowell was homeless and living in her van. She wanted her five-year-old son to receive a quality education, so she enrolled him in Brookside Elementary of the Norwalk School District. He was later kicked out due to a residency issue, so he transferred to Bridgeport schools.

Police investigated McDowell and charged her with fraud. A year later she pleaded guilty to first-degree larceny and conspiracy to commit first-degree larceny; for these offenses, she received a five-year sentence. Before McDowell started serving it out, she was charged with selling narcotics to an undercover police officer, an offense that killed her community support. McDowell was ultimately given 12 years, to be suspended after she served five, and followed by five years of probation; the narcotic sentence to run concurrently with a five-year sentence she had already received in the Norwalk school case. All of this story, from the over-policing of this mother to the severity of her sentence, along with everything she did, was obviously driven by poverty, which remains synonymous with “guilty” in our lopsided system of so-called justice.

On the other hand, you have a person like Felicity Huffman, who enjoys the many privileges that come with being a rich “Desperate Housewives” star…and having the resources to expose her daughter to educational advantages that McDowell may not have even been able to dream of: tutoring, unlimited books, technology, a safe learning environment, and even an SAT specialist who helps struggling kids obtain high scores. …[T]he actress was arrested in March on mail fraud and conspiracy charges as an outcome of the FBI’s Operation Varsity Blues investigation, and pleaded guilty to mail fraud, after paying $15,000 to allegedly rig her daughter’s SAT scores. Huffman is scheduled to be sentenced in Boston on Friday — for one month in prison, if the federal prosecutors’ recommendation is followed. Huffman’s attorneys have instead asked for a year’s probation, plus community service and a $20,000 fine.

Let’s begin with the fact that this is unethical and dishonest advocacy. Searching for an admittedly terrible prosecution from eight years ago  to contrast with Huffman’s case is contrived racism. The fact that the mother was later legitimately charged with selling narcotics renders the comparison a stretch at best.  In the absence of sufficient numbers of cases across the country to make a valid generalization, Salon’s assumptions are just cheap muckraking.

Stipulated: charging McDowell with larceny for trying to sneak her child into a better school district was a cruel and unethical prosecution; charging her with fraud and seeking a significant punishment was not. The idea was to discourage similar deceptions, no matter how well-intentioned they were.  That is a valid law enforcement objective, and an important one.

What Huffman’s attorneys proposed as appropriate punishment was irrelevant to Salon’s thesis. Their job is to get the actress as light a sentence as possible, and if possible, no sentence at all. We are not told what McDowell’s attorney’s argued on her behalf, because it is also irrelevant, but, I suspect, it was omitted because their recommendations were not that different from those of Huffman’s case.

D. Watkins, Salon’s author, says, “I don’t think Huffman will receive any time at all. This why black people make up around 13% of the total population in America, but represent over half of incarcerated people in state and federal prison.”

No, in fact the Huffman case tells us absolutely nothing about so many blacks end up in prison. However, this is the level of critical thinking so much of our punditry consists of.

Huffman did get jail time, but not very much. She was sentenced to two weeks in jail, a year of supervised release, 250 hours of community service and a $30,000 fine for paying $15,000 in a conspiracy to inflate the SAT score of her older daughter and pleading guilty last May to one count of conspiring to commit mail fraud and honest services mail fraud.

U.S. District Judge Indira Talwani’s sentence almost certainly affected more than just Huffman.  It should set a benchmark for the other 15 wealthy parents who have admitted guilt in the scam and who have yet to be sentenced.  Actress Lori Loughlin, who was also charged and had pleaded not guilty, is expected to change her plea now that she knows there is no risk of significant jail time.

The prosecutors asked for a month in jail for Huffman, which I thought was arguably fair. Many had made the valid point that the illicit manner in which Huffman, Loughlin and the rest sought to buy their less-than-stellar kids a place at a prestige college was more a breach of style than tradition. Rich and celebrity families have employed large gifts as lubricants to ease admissions to prestige schools for centuries; the mystery was always why these particular parents felt that cheating on the SATs and fabricating credentials was a better course. It was certainly cheaper, I suppose. In both the traditional means of getting dumb kids into good schools and Huffman’s way, the end result was the same: money was used to rig the system.

Prosecutors had to aim for a sentence that would dissuade other celebrity parents from trying such schemes. I agree that not much of a sentence would be required to do that, especially since the episode has been a well-publicized unmitigated disaster for the families involved. They also could have tried to make an example of the celebrity by “throwing the book at her.” For whatever reason—fairness, fear of backlash— they didn’t

The comparison with McDowell is not helpful, especially as it was raised in Salon’s article. Does Watkins want McDowell to get two weeks, or Huffman to get five years in the Salon version of justice? Who knows? The point is that the only difference is that Huffman is rich and white, and McDowell was poor and black. Well, and that they were in different jurisdictions, and their crimes separated by eight years. And that McDowell sold narcotics to undercover agents. Twice. There’s also the detail that her sentence essentially cancelled out the dubious charge for cheating to get her son into a better school. “This case is about the convictions for the sale of narcotics to an undercover police officer,” the judge said as he sentenced her. “I think you understand that because that is really the essence of what has gotten you into the predicament you find yourself today.”

Salon’s race-baiting (and Bernie Sanders, and my Facebook Borg friends, and many others) notwithstanding, no, I don’t think two weeks was an ethical sentence, unless a diabolical judge was trying to prime political exploitation of the case. Judge Marshall in this case would have noted the defendant’s first time offender status, but still would have given her more jail time than what the prosecution had recommended. Six months with the other provisions seems like a good number, maybe three.

Of course, that sentence would have been racist too, right?

There have been too many polls lately, so this time I’ll just ask: What would your sentence be?

21 thoughts on “Regarding Felicity Huffman’s Slap-On-The-Wrist”