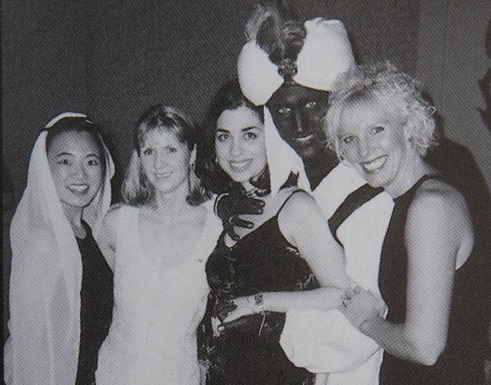 News item: “Justin Trudeau, Canada’s prime minister, wore brownface makeup to a party at the private school where he was teaching in the spring of 2001. TIME has obtained a photograph of the incident. The photograph has not been previously reported. The picture was taken at an “Arabian Nights”-themed gala. It shows Trudeau, then the 29-year-old son of the late former Prime Minister Pierre Trudeau, wearing a turban and robes with his face, neck and hands completely darkened. The photograph appears in the 2000-2001 yearbook of West Point Grey Academy, a private day school where Trudeau was a teacher.”

Also: “The re-election campaign of Prime Minister Justin Trudeau of Canada was thrown into turmoil on Wednesday when a photograph surfaced of him wearing brownface makeup at a 2001 private school party….Speaking with reporters aboard his campaign plane, Mr. Trudeau, who has long championed the rights of racial minorities in Canada, confirmed that he was in the photo and that he was dressed as Aladdin.

“This is something I shouldn’t have done many years ago,” Mr. Trudeau said. “It was something that I didn’t think was racist at the time, but now I recognize it was something racist to do, and I am deeply sorry.”

1. Wearing make-up to create an image along with a costume is not “racist.” Either Trudeau is just pandering  and grovelling to political correctness, or he’s not every bright. I’ve written about this before, most notably here (the post that got Ethics Alarms banned from Facebook). How is that make-up a negative commentary on the inferiority or inequality of a race? Not being sensitive to the hair-trigger offense reflexes of minorities and activists looking for a “gotcha!’ is not racist. It is not being sensitive to hair-trigger offense reflexes by minorities and activists looking for a “gotcha!”

2. Why is Trudeau’s make-up called “brownface” and less dark make-up called “blackface” when an African-American is being portrayed? Who makes these rules? That sure looks black to me. Most critics refer to Dan Ackroyd’s Jamaican make-up in “Trading Places” as “blackface.” I’d like to know what the distinctions are, since they obviously have nothing to do with color.

Or is it blackface when an American uses dark make-up, and brownface when the miscreant is a Canadian?

3. Jagmeet Singh, a Sikh who is the leader of the New Democratic Party,  said Trudeau’s Aladdin costume was “insulting” and that it might indicate that  the prime minister is not the same person in private as he portrays himself in public.

Imagine,  a politician who represents himself as different from his private personality! Ironically, the only politician and national leader who does not try to represent himself as someone other than who he “really” is seems to be Donald Trump.

4. But, to be fair, how someone behaved 18 years ago only tells us what he may have been like 18 years ago. This is why the Ralph Northam blackface scandal was overwrought, except that it demonstrated the hypocrisy of Democrats.

5. Voting against Trudeau because of a costume and make-up he wore to a long-forgotten party would show a weird and warped priority of values. Voting against him because it is part of a lifetime trend of poor judgement and silliness would be more justifiable. “[The photo] could repel some progressive voters who are against any kind of cultural appropriation and especially blackface,” said Jean-François Daoust, an expert in public opinion at McGill University. “It can undermine the aura he has tried to create.”

Prosper by foolish voters who prioritize progressive cant-driven nonsense, die by them.  It is fair for politicians who mouth irresponsible rhetoric to be held to the consequences and assumptions created by that rhetoric.