The same as what?

I heard this song yesterday for the first time in many years, and immediately wondered how many people  my son’s age (he’s 24) or even older would know what “Spanky and Our Gang” referred to. Then I made the mistake of briefly watching HGTV’s “A Very Brady Renovation” and saw to my horror that all the “Brady Bunch” kids are senior citizens. “Who’s that old lady? OHMYGOD It’s JAN!!!!”

1. Well, it was nice while it lasted...Traffic here increased by about 30% over three days last week after Facebook slipped up and allowed a link to one Ethics Alarms—it violates Facebook community standards, don’t you know— post to be circulated on among users.

2. Here’s a poll on the previous post, about a controversial joke related to the Texas governor’s disability that was made by a female judge. Governor Abbott has been in a wheelchair ever since he was struck by a falling tree almost 40 years ago. Noting that Texas Republicans have opposed proposed environment-minded legislation, “even local tree ordinances,”  the judge quipped to her partisan Democratic crowd, “Governor Abbott hates trees because one fell on him.”

While we’re on the subject of polls, the Ethics Alarms readers were strongly opposed to the course of action discussed here, here, and here, with about 88% holding that a Swedish man should not have allowed a doctor to euthanize his sister despite her past consent to the procedure, because she was resisting.

3. If you question whether this is a coincidence, you’re just a wacko conspiracy theorist, or so I’ve been told…[Notice of Important Correction: Go here.] The intelligence community quietly eliminated a requirement that whistleblowers provide direct, first-hand knowledge of alleged wrongdoings that had existed since May, 2018. The revised version of the whistleblower complaint form was not made public until after the transcript of the President’s July 25 phone call with the Ukrainian president Volodymyr Zelensky It had eliminated the first-hand knowledge requirement, allowing government employees to file whistleblower complaints even if they lack direct knowledge of underlying evidence and only “heard about [wrongdoing] from others.”

The newly revised “Disclosure of Urgent Concern” form, which must  be submitted under the Intelligence Community Whistleblower Protection Act (ICWPA), show that the document was uploaded on September 24, 2019, at 4:25 p.m., only days before the anonymous complaint was declassified and released to the public. The markings on the new version of the document state that it was revised in August 2019, with no specific date of revision is disclosed.

The previous version of the whistleblower complaint document, which the ICIG and DNI  provided to potential whistleblowers before this August, declared that a complaint must contain only first-hand knowledge of alleged wrongdoing and that complaints that provide only hearsay, rumor, or gossip would be rejected.

“The [Intelligence Community Inspector General] cannot transmit information via the ICPWA based on an employee’s second-hand knowledge of wrongdoing,” the previous form stated under the bolded heading “FIRST-HAND INFORMATION REQUIRED.” “This includes information received from another person, such as when an employee informs you that he/she witnessed some type of wrongdoing. If you think that wrongdoing took place, but can provide nothing more than second-hand or unsubstantiated assertions, [the Intelligence Community Inspector General] will not be able to process the complaint or information for submission as an ICWPA,” the form concluded.

The Federalist’s Sean Davis revealed this two days ago. Has anyone seen mention of it in the news coverage by the mainstream media?

4. “And now, the rest of the story…” as the late Paul Harvey used to say. In August, I posted an Ethics Quiz and poll about Charles Anderson, a Michigan police officer who was placed on administrative leave and investigated after a black family touring Anderson’s home as potential buyers reported on Facebook that the officer had a framed application to the KKK hanging on the wall as well as some Confederate flags.

While holding that it was unfair for Anderson to be punsihed professionally for what he kept in his home, I also posited the  “Racist Home Decorations and Memorabilia Principle,” similar to the Naked Teacher Principle Ethics Alarms frequently discusses. The RHDAMP states that while you have a right to display and collect whatever you want, but if your tastes appear objectively racist and your memorabilia somehow becomes known to the public, you can’t complain about the  adverse consequences. You accepted the risks.

Anderson has now been fired.

5.Nah, there’s no “Deep State”! Someone just recalled that after president-elect Trump criticized U.S. intelligence agencies. Chuck Schumer told MSNBC’s host Rachel Maddow.“Let me tell you: You take on the intelligence community — they have six ways from Sunday at getting back at you.” 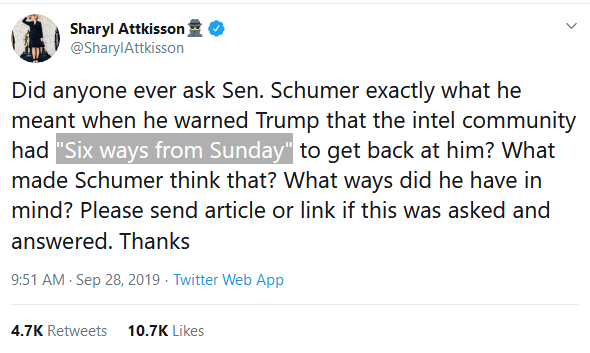