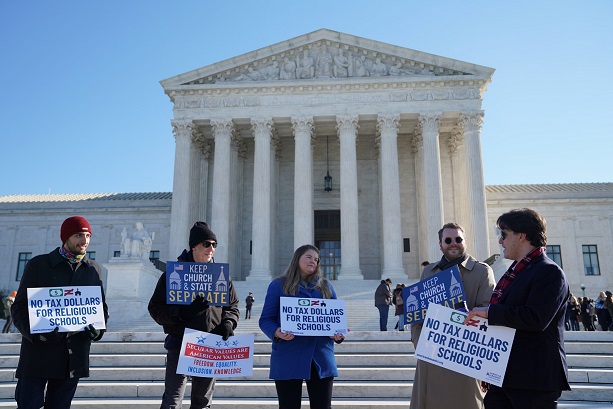 This opinion just came down, and I haven’t had an opportunity to read it, and probably won’t until tomorrow.  In Espinoza v. Montana Department of Revenue, the justices held that the application of the Montana Constitution’s “no-aid” provision to a state program providing tuition assistance to parents who send their children to private schools discriminated against religious schools and the families whose children attend or hope to attend them, in violation of the free exercise clause.  This was a straight conservatives vs. liberals majority, and Chief Justice Roberts, much maligned of late, wrote the majority opinion. The Washington Post  reports,

Chief Justice John G. Roberts …said the Montana Supreme Court was wrong to strike down the program because of a provision in the state constitution that forbids public funds from going to religious institutions. The U.S. Constitution’s protection of religious freedom prevails, he said.

“A state need not subsidize private education,” Roberts wrote. “But once a state decides to do so, it cannot disqualify some private schools solely because they are religious.

Again, I haven’t read the legal arguments, but the ethical justification for the opinion is clear. If public schools could be trusted not to indoctrinate students with political view and social positions that their parents might oppose, the urgency of the state providing affordable alternatives would be far less. However, alert and involved parents realize, or should, that by sending students to public schools, they are too often subjecting them to partisan and ideological brain-washing, and we are seeing the results in the streets as I write this. There need to be alternatives other than home-schooling. The ethics principles here are fairness, respect, and autonomy.

Anecdotally, the experiences my wife and  I had with private schools and a religious school to avoid the wretched public schools in Alexandria, Virginia were not good, which is why we resorted to home-schooling. One private school showed bias against boys to the point of psychological abuse. Another was overtly ideological in its instruction. The religious school, which we tried as a last resort following assurances that the religious instruction would be minimal, was operated like a Soviet military school, and we extracted our son by New Years. Then he briefly attended the city’s massive and fabled public high school, T.C. Williams, where he was robbed twice in a month, and reported that none of the classes ever started on time because it took up to 20 minutes for teachers to quiet the class.