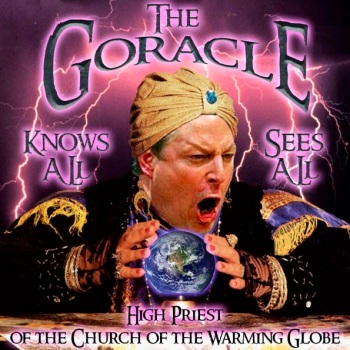 Al, as he is portrayed by the climate change skeptic community. He has no one to blame but himself.

I have mixed feelings about Al Gore. On one hand, I have great compassion for the man, as one of two Presidential candidates in our history to win more popular votes than his adversary, still lose the Presidency, and fail to take the office in a subsequent attempt. I know that would make me angry, bitter and perhaps a little crazy, and in that respect, Al has handled his misfortune well.

On the other hand, I wouldn’t trust Al Gore to deliver a birthday card to John Edwards. Back when I was running a struggling national health care promotion and education non-profit, Senator Gore was the organization’s patron saint, giving us endorsements, opening doors to corporate contributors, and generally bolstering our efforts. I was warned, though, by one of his staffers, not to get too dependent on Gore’s passion. “The Senator likes to find the hot issue and lead it,” she told me. “But he’s been on health care for a while now, and if history is any measure, he’ll move on to something else soon. Don’t rely on his support.” Sure enough, Gore became the herald of “the information super-highway,” later known as the internet, shortly thereafter, and dropped my organization and the health promotion issue flat, without a warning or a good-bye. He just stopped answering our calls.

Gore finally found his perfect hot issue, literally in this case, as the front man for global warming. He has made millions from the issue and the notoriety it brought him, which is fine; he also greatly contributed to public awareness of the issue, which is a good thing: any public awareness of any real public policy issue is an improvement. On the minus side, Gore failed to follow through on his responsibilities and obligations as a spokesperson for climate change policies. He never educated himself on the science of climate change sufficiently to avoid making embarrassing gaffes, and he has continued to over-hype the topic, making apocalyptic pronouncements, treating projections and models as more conclusive than they are, making irresponsible and factually misleading statements,  and generally imitating the technique of the Bush Administration regarding Iraq’s “weapons of mass destruction.”

He was at it again this week, conclusively affirming that he has crossed the line from advocate to hustler. In an interview with uncritical liberal Washington Post interviewer Ezra Klein (the Post would have done Gore a a favor by assigning the job to an objective or even an adversarial reporter), Gore delivered at least two embarrassing whoppers:

“You mentioned my movie back in the day. The single most common criticism from skeptics when the film came out focused on the animation showing ocean water flowing into the World Trade Center memorial site. Skeptics called that demagogic and absurd and irresponsible. It happened last October 29th, years ahead of schedule, and the impact of that and many, many other similar events here and around the world has really begun to create a profound shift.”

As James Taranto correctly points out:

“The reference is to Hurricane Sandy, a Category 2 storm when it struck the Northeastern U.S., flooding parts of New York and New Jersey, including downtown Manhattan. (Sandy peaked in the Caribbean as a Category 3 storm. By comparison, 2005’s Hurricane Katrina went as high as Category 5 and made landfall at Category 3.) But if we roll the film–we find that what Gore predicted in “An Inconvenient Truth” was something far direr than a storm and a flood. He predicted that lower Manhattan–along with vast and heavily populated swaths of Florida, California, the Netherlands, China, India and Bangladesh–would be permanently submerged owing to higher sea levels.

“Think of the impact of a couple of hundred thousand refugees when they’re displaced by an environmental event,” Gore intoned in the movie. “And then imagine the impact of 100 million or more.” And then keep imagining. While Sandy caused severe temporary disruption and wrought an unusual amount of damage because it happened to hit a population center, it was not different in kind from other natural disasters. Lower Manhattan was soon dry again.”

This is worse than hyping, in my view. This is intentional deception. Gore knows the difference between predicting that the East Coast would be submerged for good after the polar ice melts, and the temporary results of a storm-caused flood. He’s lying.

At this point, it is climate change policy advocates who should be criticizing Gore, not the skeptics. Gore makes the skeptics look good. He epitomizes the kind of sloppy, doctrinaire, “everyone knows this is true and you’re an idiot if you don’t agree,” pseudo-science that undermines the credibility of real science and genuine research on climate change. The closer Gore is associated with the climate change advocacy, the more he undermines the position’s legitimacy by playing fast and loose with the facts; it is simple cognitive dissonance.  Again, Gore hasn’t done his homework  or applied the due diligence necessary if he is going to be a figurehead of  climate change advocacy. He isn’t brilliant, but he got C’s at Harvard: he’s smart enough to have a sound layman’s understanding of the real science. He’s been too lazy, too arrogant, or too busy making money to do it, and he is harming his own issue, and his own allies, as a result.