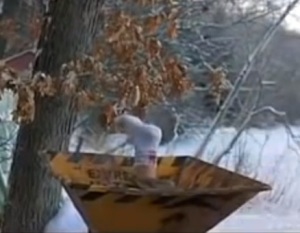 “Wait, let’s not leap to conclusions…maybe he’s not dead.”

In Fresno, California, Scandinavian Middle School vice principal Joe DiFilippo was recorded on video by a student saying, “I don’t like black kids” in the cafeteria. The video was then posted on YouTube. Fresno Unified School District officials said DiFilippo has been placed on paid administrative leave pending an investigation.

Maybe I’m suffering from a momentary lack of imagination, but what else do they need to know? I understand union rules and the need for due process, but what findings could possibly, ever, under any circumstances, allow DiFilippo to keep his job? 11% of the school’s students are black. Why would they ever feel secure going to a school where an administrator said such a thing in the school? (I’m assuming the man didn’t really say, “I don’t like black kids any more or less than I like any other kids, as everyone in the school knows.” Watching the video would presumably make that possibility moot.)

District officials say they are investigating “the context in which the comment was made.”  What possible context could mitigate that statement? Let’s see…maybe he was talking about not liking them for special purposes, like snacks or as piñatas? “I don’t like black kids..when they’re on fire? When they are holding Uzis on my family? When they sing the Sponge Bob theme song”?

It doesn’t matter! If there is anything the man doesn’t like about black kids that he accepts about white kids, he’s not qualified to be a vice-principle.

Every second Mr.Fillippi doesn’t resign, he’s wasting time and money, and proving that he is just as big a fool as the video shows him to be. If no investigation can save  him, then he shouldn’t wait for an investigation to do the right thing.

20 thoughts on “Shortest Investigation Ever: Determining Whether It Was Inappropriate For The Middle School Vice Principal To Say In A Video, “I Don’t Like Black Kids””