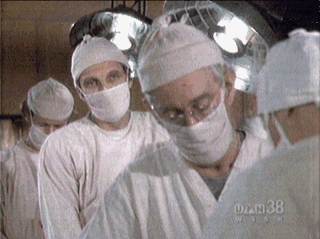 So, did you hear the one about why surgeons wear those masks?

When I first heard about this case, I thought the jury award of $500,000 was ridiculous. The more I think about it, the more I begin to think it was appropriate.

Before his colonoscopy, a Vienna, Virginia patient pressed record on his smartphone, not intending to record everything that was said but ending up with the entire proceedings anyway. That was a half-million dollar stroke of luck for him, and the confirmation of dark suspicions for the rest of us. The resulting recording revealed that the surgical team amused itself by insulting and demeaning the semi-conscious anesthetized man throughout the procedure.

The anesthesiologist, Tiffany M. Ingham, was the ringleader and the primary offender.  Among her inspired bon mots…

There was more. The patient sued the gastroenterologist who performed the colonoscopy, Soloman Shah, and Ingam for malpractice and defamation. Though Shah was not guiltless, and did not attempt to stop the trash talk from Ingham or prevent her from writing on the man’s chart that he had hemorrhoids as a joke, he was dismissed from the suit. The jury hit anesthesiologist, however, with a $500,000 damages award. The jury awarded the plaintiff $100,000 for defamation ($50,000 each for the comments about the man having syphilis and tuberculosis), $200,000 for medical malpractice, and $200,000 in punitive damages.

I find the defamation claim to be a stretch at best, as demeaning as the remarks were. The tort requires that the party being told something false about an individual must believe it, and the comments recorded seem obviously facetious. The $100,000 is a gift. $200,000 for malpractice when a doctor intentionally writes something false on a patient’s chart just for giggles seems fair, and even too mild. That’s shocking. As for the $200,000 punitive damages to bring the cost to Ingham for her big mouth up to a nice, round $500,000, I see the jury’s point.

We are helpless under anesthesia, and we depend on medical professionals to be trustworthy when we are under their care. The thought that doctors are treating us as pieces of meat while we are unconscious, or worse,  like props or victims in a fraternity hazing stunt, is a horrible one that threatens the doctor-patient relationship at its core. Doctors don’t really mock our bodies when we are unconscious, do they? Do they? They are serious and professional, right? RIGHT? M*A*S*H was just a TV show, please tell me that! Doctors don’t really joke around while they have our lives in their hands.

Oh, I’m sure many of them do, if the surgeons in charge aren’t meeting their ethical obligations. All medical codes of ethics require that doctors, any doctor, respect patients at all times, treat them with dignity, and be advocates for patients’ best interests and rights at all times. This isn’t one of those breaches where an ethicist has to do extensive research about whether conduct nicks some obscure rule, item G, (34), (r) of a sub-chapter. You don’t lie on a patient’s chart. You don’t call him a retard and make fun of his penis while he’s sleeping. It’s wrong.

The incident in Virginia wasn’t just a case of one patient being abused, but one that threatens trust in the entire medical profession. Maybe $500,000 in damages is an appropriate sum to send a message to any doctors on the verge of forgetting that those are human beings in the operating room.

Earlier this month, state representatives in Wisconsin introduced legislation to mandate that any place where surgery is performed must “offer surgical patients the option to have their surgical procedures videotaped.” Good. That way, when the doctors put a clown nose on me while I’m out like a light, I’ll know about it, as well as all the nasty things they say about my…feet.

66 thoughts on “The Case Of The Trash-Talking Doctors, And The Price Of Trust”