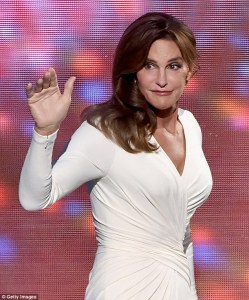 Arthur Ashe was too good for you, Cait…

I should have already given ESPN an Ethics Dunce for designating an “Espy,” an award given by the cable sports channel to justify having an awards show—to Caitlyn Jenner for the courageous sports achievement of being an aging reality show star who once won an Olympics event and decided that he was now a she.  Why I didn’t, I don’t recall. I think my reasoning was that since the awards are just a PR gimmick anyway, it wasn’t worth the post.  I wasn’t paying attention: I did not sufficiently focus on the fact that “Espy”she would receive was named after Arthur Ashe. I did already discuss  the ethical problems with turning Jenner into a trans icon, since her transition seemed to be in part a money-driven career move. Now, following Jenner’s tearful and touching acceptance of “the Arthur Ashe Courage Award” on TV, we learn this:

“Reports have emerged that Jenner’s team approached ESPN with the idea that she win the Arthur Ashe Courage Award just as details were being finalized for her 20/20 interview with Diane Sawyer on ABC. ABC and ESPN are both owned by Disney, and ABC aired Wednesday’s awards ceremony. “It was a brilliant move because the executives at ESPN loved the idea, and immediately began making sure it got done,” a source familiar with the negotiations told RadarOnline.The talks hit a stumbling block, and Jenner’s agents were reportedly prepared to pull out of the interview with Sawyer. “It was ironed out, and ABC owns one of the biggest stories of the year.” The build up to Jenner accepting the award will be featured in her upcoming reality show, “I am Cait”, generating a great deal of publicity for both ESPN and the awards.”

Wow! Who could have seen that coming—a reality show star, who has been part of the shameless and venal Kardashian family, cynically manipulating the media and gaining phony recognition on a nationally broadcast awards show…and, in the bargain, debasing the name of a real sports hero, the dignified, sportsmanlike, role model Arthur Ashe, an African American champion in the white man’s game of tennis who helped make Serena Williams’ prominence possible!

What does this mean? To begin with, it means that Jenner bought her award. I don’t want to read any Clintonian deceit about how this isn’t technically true….she bought it. There is no reason to believe ESPN would have given the award to Jenner had her agents not suggested it, and ESPN’s parent received value that translated directly into profits with the exclusive, high-rated ABC interview with Sawyer. Jenner might as well have slipped ABC a couple of million in a big valise  under the table. This was a bribe. This was an award bought and paid for.

What does that mean?

It means…that the Espy awards are an even bigger joke than they already were. They have no integrity. Awards that are up for auction aren’t distinctions and the aren’t honors, they are commodities.

It means…that no athlete with any integrity or self-respect should dignify the awards show with their presence, and none should accept an award that has been so tainted.

It means...that no sports fan with any self-respect or integrity should debase themselves or their species by watching the Espys. ESPN is lucky again: there are enough ethically inert sports fans who will wear Ray Rice jerseys, cheer NFL players as they turn their brains to mush, make excuses for Lance Armstrong, Barry Bonds, Pete Rose and Alex Rodriguez and shrug off the corruption of NCAA football and basketball to ensure the show an audience of millions anyway.

It means...that if Diane Sawyer knew that her interview was obtained in this way, she is fully complicit in the deception, as well as the insult to Arthur Ashe’s memory.

It means…that the family of Arthur Ashe should demand that his name is removed from the “award,” since it no longer stands for values that he could support, or that any decent family would want associated with a respected and honorable loved one.

It means…that Disney, ESPN, Diane Sawyer and Caitlyn Jenner conspired to keep the the Arthur Ashe Courage Award from being awarded to the obvious and deserving recipient,  the late Lauren Hill, a Mount St. Joseph student athlete who gained international attention when she decided to play on the freshman basketball team even as her inoperable brain tumor was killing her. She played the team’s opener—moved up in the schedule so she would be well enough to participate, and scored two points before being replaced in the first quarter. She then set up a fund to raise money for cancer treatment and research.

But what is a young woman’s real courage compared to a reality star’s courageous self-promotion?

It means…that LGBT activists and advocates need to find better —much better—champions, trail-blazers and exemplars. Caitlyn Jenner, whatever her current gender, is a Machiavellian huckster. If she is the face of trans America, their battle against bigotry just got a lot harder.

26 thoughts on “So Caitlyn Jenner BOUGHT Her ESPN Arthur Ashe Courage Award From Disney: What Does It Mean, And Why Is Anyone Surprised?”