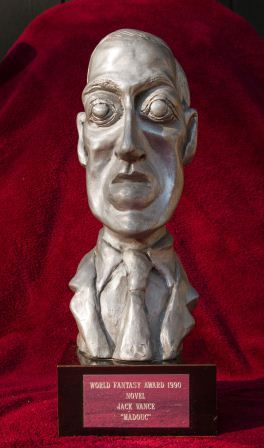 The bust says it all…

Really bad and dangerous ideas take hold and thrive because, like a particularly deadly virus, they pop up in so many places at once, especially dark corners and exotic locals. The current progressive contagion of airbrushing history, toppling icons and cultural bulldozing–one of several  habits of successful totalitarians being embraced by the left these days—is such an idea. As usual, defenders of this thought-inhibiting and unjust practice behave as if it is the epitome of common sense and virtue, when in truth it is the  opposite.

To the credit of the followers of the World Fantasy Award (for literature in the fantasy an horror field), the administrators’ decision to cave to political correctness and retire an H. P. Lovecraft bust (designed by black humor cartoonist Gahan Wilson) as its symbol—H.P. was like, Woodrow Wilson, a white, Western culture supremacist —was not met with universal approval. Nonetheless the Award’s head honchos did it.

They did it to mollify the social justice zealots in the organization’s midst, who insisted on sending the message that currently non-conforming ideas and beliefs should be punished decades or even centuries later by pretending that legitimate and important contributions to art, politics, science and civilization didn’t exist, if the man or woman involved stepped across a political correctness line that didn’t exist when it was stepped over. All it takes to justify eradicating any honor, recognition or symbol of cultural gratitude is for a major historical figure in any field to have been shown to have engaged in, thought about (or consorted with those who engaged in or thought about) practices that the current culture, with assistance of many years of debate and experience that the toppled never had, now finds misguided, objectionable, offensive or wrong.

The proper punishment for this retroactive crime, these spiritual brethren of Stalin believe, is banishment, rejection and shame in the very field where the individual’s positive accomplishments reside. This is necessary to keep future generations from being influenced by ideas that might trigger discomfort among true believers of the official creed.

Thus, reason doctrinaire Princeton kids who have figured out The Great Truths at their tender age, Woodrow Wilson’s major contributions of strengthening and burnishing the name of the college, leading the United States for two terms, including through a world war, and devising the concept of the United Nations, no longer warrant respect and memorial, because he was, like so many other Southerners of his time, an unapologetic white supremacist. Of course, so was Abraham Lincoln and much of the nation, but that cuts no ice with the practitioners of merciless presentism. It isn’t just the views of the long dead that are being punished, you see. It’s a warning to non-conforming thinkers alive yet. Watch out! it says. Your thoughts, inspirations and ideas are impure and wrong, and you are still vulnerable to real punishment, not just the post-mortem fate of being defiled and forgotten.

Every situation is a bit different, and who can decypher the sliding scales and fluctuating values that are employed to decide that a give important figure needs to be ejected into oblivion.  Franklin Roosevelt just had a major memorial built to him, even as it was dawning on FDR’s liberal worshipers that Woodrow was a KKK admirer. Yet Roosevelt allowed a nest of anti-Semites under his supervison to turn a blind eye to the Holocaust; he approved the imprisonment of 100,000 Japanese citizens; and truth be told, I’d guess that he was something of a white supremacist himself. Why is he immune from the Big Topple, and Wilson is not? John Fitzgerald Kennedy was as much of misogynist as Wilson was a racist: why hasn’t his bust been banished from the Kennedy Center, while the performing arts building itself is renamed “The Steinem Center” or something similar? Later, when it is discovered deep in Gloria’s diary that while fighting for women’s rights she secretly barbecues and ate puppies, we help PETA  pull down her bust and name the Center for Lassie. Why is Planned Parenthood still honoring Margaret Sanger, who would have been likely pals with Josef Mengele?

Author Stephen Erickson wrote a rebuttal of critics of the decision to dishonor Lovecraft; I don’t have the energy to dismantle it in the detail it deserves, since I have dismantled its threadbare arguments before. I will say that applying retroactive political correctness to Lovecraft is particularly silly and wrong for several reasons. Unlike President Wilson, his political beliefs had no impact; they were just beliefs, and beliefs that were, though Erickson discounts the fact, considered common, reasonable and respectable in their time. The man was born in 1890, for heaven’s sake. He died in 1937, before the Holocaust, before the Civil Rights movement, and before blacks were allowed to play Major League baseball. Thirty years after his death, it was considered shocking for Captain Kirk to kiss Uhura on Star Trek. Lovecraft was also a very strange man, hardly anyone’s role model, and quite possibly mentally ill: the same brain peculiarities that caused him to dream—he turned his dreams, which for any of us would be the worst nightmares we ever had in our lives, into his stories–such horrors also produced his politics. Who can say that it was possible for him to have one without the other? That aside, the truth is that nobody in their right mind would honor Lovecraft the man, racist or no racism, any more than the mystery writers whose award is bust of Edgar Allen Poe would honor the man, rather than the man’s art.

The quick summary of Erickson’s flawed position is that race is more important than anything. At this moment, progressive cant holds that it is more important than free speech, merit, freedom of association, objective journalism, education, standards, safety, national defense, law enforcement, history—everything, or close to it. Anyone who assumes this race obsession will stand in perpetuity, even for group identity addicts, is a fool. Priorities change, perceptions change. Ideas change, if we allow them to be expressed, which right now is an American principle under assault.

The nucleus of what passes for his argument is contained in this passage:

[ A critic] points out that the World Fantasy Award is not about racism, and he’s right.  It’s not.  So why symbolise it with the bust of a racist?

The short answer is that the award is the bust of an author of indispensable  importance and influence in the field bestowing honors, and it refers to his writing and only his writing, as his writing relates to that field. It is not, for this purpose, the bust of a maladjusted hypochondriac obsessed with his mother and a lifetime failure, or an antisocial loner, or a racist, any of which accurately describe Lovecraft the man. Erickson’s impossible standard–no award or honor can be linked to anyone who engaged in any conduct now considered reprehensible by any group, spoke any words that good and right citizens today would object to, or be shown to have thought condemned and prohibited thoughts at any point in their adult lives.

It is an open question whether the genre that H.P. Lovecraft’s bust once celebrated would be half as important or vital without his work, or whether most of the authors it honored would be parking cars if he did not write his weird tales.  Call me an old softie, but I think that should count for a lot more than the crackpot social theories he wrote about in his letters and  the tangential asides in his narratives. Joyce Carol Oates,  Stephen King and others have agreed that Lovecraft’s contributions to fantasy and horror literature were indispensable to its development and popularity, as well as a crucial inspiration to many, if not most, of the practitioners who followed. That’s enough. That’s all that is necessary to fairly assure the author permanent honor for his legitimate and undeniable achievements. The bust didn’t honor his racism, or even refer to it, any more that the J. Edgar Hoover building honors the FBI founders biases, or that Martin Luther King Day celebrates adultery. Trailblazers and founders, warts and all, must be honored, always and forever. To reject the memories of pivotal figures who are responsible for the existence of a profession, an industry, a genre, a tradition, a city, company or a nation is a betrayal.

Nobody, past of present, living or dead, can meet that standard, and it is unethical to apply it to H.P. Lovecraft, Woodrow Wilson, or anyone else.