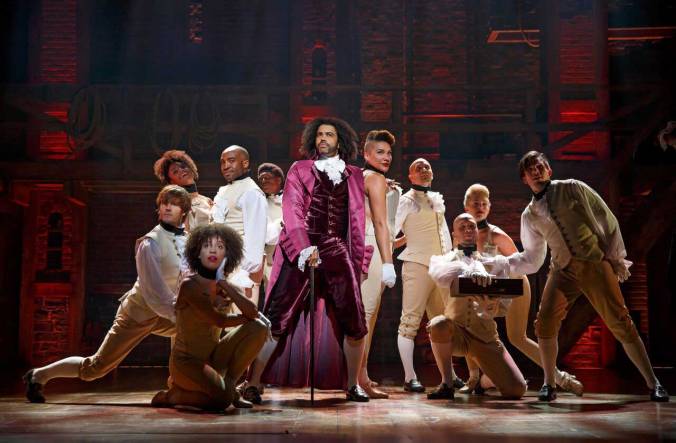 [ I am back from a speaking engagement that required over eight hours of driving, being in a supposedly “luxury resort” hotel room that had no Wi-Fi for most of my stay and no functioning TV for any of it,  and various other distractions and misadventures that prevented me from posting so far today. I apologize, though it is really the famous Omni Homestead in Hot Springs, VA. that should apologize. The good news is that my seminar was well-received, and that the disappointing trip–this time I was paid only with the supposedly sumptuous two-day  Homestead experience for myself and my long-suffering spouse, including outdoor activities that were impossible due to constant rain and a room with more things in poor repair than a Motel 6—is over.]

Broadway’s biggest hit, the Tony-winning  “Hamilton,” is under attack for, of all things, racism.

An open casting announcement on the show’s website read…

“Hamilton” is “seeking NON-WHITE men and women, ages 20s to 30s, for Broadway and upcoming Tours.”

Whaaaat? This joyous musical celebration of America’s founding and its Founders’ inspiration…engaging in racial discrimination? How could this be? Sniffed Actors Equity spokeswoman Maria Somma “The language … is inconsistent with Equity’s policy.”

Yes, this would be because Actor’s Equity has a lot of dumb policies, and like all unions, doesn’t really care about keeping the industry its members work in healthy, productive and profitable, only  making sure as many members as possible have jobs or at least shots at them. There is nothing whatsoever racist or discriminatory about a show that relies on the concept of non-white actors playing the very white Founding Fathers announcing that only actors who can fulfill that conceptual requirement will be considered for roles.

Civil rights attorney Ron Kuby, in an interview with the NY Daily News,  agreed the advertisement might technically violate the city’s human rights law, but that this is because casting is an anomaly. “It’s almost always illegal to advertise on the basis of race, but when you’re casting … it can be a bona fide occupational requirement,” he said.

But why couldn’t properly talented white actors use dialect and make-up to meet the requirements of the roles? He or she could, in a sane and logical theatrical world, but actors have allowed their political correctness and extremist leanings to undermine their art. Yes, this device called “make-up” is a theatrical tool many thousands years old, ethically neutral and basic to the concept of acting.  Make-up designed to allow a performer to play a character of another race, however, is currently taboo because it reminds some ill-educated people of blackface, just like the word “niggardly” is taboo because it reminds illiterate people of another, completely unrelated word.

In fact, telling actors that their race disqualifies them for certain roles is ethical, because it is transparent, honest and kind, and prevents them from wasting time and expensive head-shot resumes auditioning when they have no chance. Today, however, while your casting call for “The Wilt Chamberlain Story” one man show might escape protests and threatened lawsuits if you say “TALL ACTORS ONLY,” if you dare say that only tall, black men can audition for the part of an iconic tall, black man, you’re spitting in the wind.

“It is advisable to take an affirmative approach, rather than an exclusionary one,” said Howard Sherman, interim director of the Alliance for Inclusion in the Arts, in reaction to the controversial casting notice. Even if the approach cannot be honestly “affirmative,” Howard? Not all exclusions are racist, biased, bigoted, illegal or inappropriate, especially in casting. If a revival production of the old musical “Superman” can say “only athletic looking male singers with muscles” will be considered as Superman,  and it certainly can, “Hamilton,” in which the casting of non-whites is part of its concept, can and should say that no white actors will be cast.

“If it was the other way around, Sharpton would be down here in a frenzy,” noted a “Hamilton” stagehand. You mean if there was a show in which the whiteness of the cast was essential to the story, the characters, the message and the concept of the show, Al would make a fool of himself arguing, say, that blacks should be encouraged to audition to play Jefferson Davis, George Wallace, or David Duke? Well, maybe he would, being Al, and so what? This kind of observation adds nothing to the discussion, and confuses the issue.

It isn’t only stage hands who are confused. So are law professors. Jonathan Turley writes,

“If racial casting is permitted for plays, can other businesses claim that same right to discriminate as necessary to maintain an image or tradition? Even among acting positions, how do we draw this line? Here the producers are claiming that it is an “accepted practice that certain characteristics in certain roles constitute a bona fide occupational qualification.” That would seem to suggest that black actors could be barred from leading roles that are historically white or based on white characters in literary works.”

Yes, that’s exactly what it would imply, and that makes perfect sense without suggesting a racial animus or racist result at all, especially since the group excluded by racial verisimilitude is the same one arguing that whites can’t play Othello, which is nonsense. If the race of the actor is an important feature of a stage work’s success, then it is neither racist, unethical, unreasonable nor inappropriate to make that particular race a requirement of casting—and saying so in the casting announcement. The only reason Turley’s line seems hard to draw is because race-hucksters and ideologues only care about power, not art, and an issue entirely within the realm of expression and artistic freedom is being distorted for political leverage.