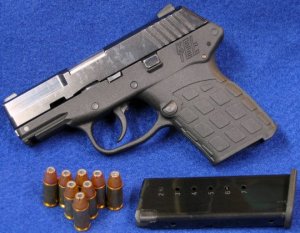 George Zimmerman is auctioning off the 9-millimeter pistol he used to shoot Trayvon Martin on a website called GunBroker.com.

“I am honored and humbled to announce the sale of an American Firearm Icon The firearm for sale is the firearm that was used to defend my life and end the brutal attack from Trayvon Martin on 2/26/2012.”

George goes on to say that the proceeds will be used to “fight [Black Lives Matter] violence against Law Enforcement officers” and to “ensure the demise of Angela Corey’s persecution career and Hillary Clinton’s anti-firearm rhetoric.”

Social media is going  nuts with hate, with many comments wishing that someone would buy the gun and shoot Zimmerman with it.

There is absolutely nothing unethical in any way about Zimmerman selling his property, including the gun that he used to shoot Trayvon Martin.

The gun has historical and cultural significance. Despite its grisly past, someone may want to purchase it.  Booth’s derringer is exhibited at Ford’s Theater, and nobody has ever taken offense at someone purchasing and exhibiting the gun that killed a President and American icon.

The hysterical reaction to the auction is a response to the “Ick Factor,” and only that. It is certainly tasteless to place the gun up for sale. The act was predictably likely to upset and enrage many. But many of those many are outraged because they persist in regarding Zimmerman as a cold-blooded, racist killer, despite the absence of any evidence of either.  They and others like them unethically destroyed Zimmerman’s life in order to score racialist political points, without regard for due process or fairness. There is no reason why Zimmerman should consider their feelings at all, though it would constitute exemplary Christian ethics if he did.

Maybe the proceeds of the auction will pay for the surgery and the ticket. I hope so. Zimmerman was a fool and his reckless choices resulted in a young man’s tragic death. He is not a murderer, however, nor a racist, or wasn’t until black activists put a bounty on his head. He does not deserve a sentence of lifetime harassment.

As an aside, the Washington Post’s lead for this story (by Travis Andrews) was incompetent, obnoxious, and misleading:

“George Zimmerman shot and killed 17-year-old Trayvon Martin on February 26, 2012. Zimmerman was charged with second-degree murder and manslaughter, then acquitted by a Florida jury on July 13, 2013. The case sparked a nationwide debate and protests over “stand your ground” laws and race relations in the United States.”

He was NOT charged with manslaughter. He was acquitted by a finding of self-defense, and if you are going to say he “shot and killed” Martin, you are obligated to note the reason for the acquittal. There was never any indication that race was a factor in the incident, and it was not an incident covered by “stand your ground” law.

The news media continues to paint Zimmerman as a villain when the evidence, the trial and the law clearly indicate otherwise.

As for Zimmerman’s pledge to “fight [Black Lives Matter] violence against Law Enforcement officers” and to “ensure the demise of Angela Corey’s persecution career and Hillary Clinton’s anti-firearm rhetoric,” good for him. All three are legitimate, ethical, and praiseworthy objectives.

86 thoughts on “Ethics Verdict On George Zimmerman’s Gun Auction: Ick, But Not Unethical”