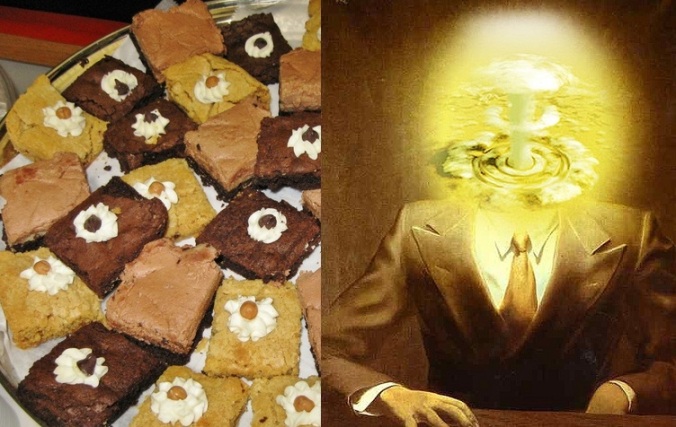 This story made my head explode, and thus it will be tagged “Kaboom!” Unlike most such Kaboom! posts, however, this one is likely to make my head explode every time I read it. Or think about it. Forever.

On June 16, a third grader made a comment about the brownies being served to his class during an end-of-the-year class party at the William P. Tatem Elementary School in Collingswood, New Jersey.  After another student opined that the remark was “racist,” the school called the Collingswood Police Department.

“What is the nature of your emergency?” “A third-grader in my class made an inappropriate remark about brownies!” “Calling 911 with prank calls is a crime, ma’am. Don’t do this again.”

It is per se unethical and irresponsible for any police department to treat such trivia seriously.

“The police officer spoke to the student, who is 9, said the boy’s mother, Stacy dos Santos, and local authorities.”

And said what? “Watch what you say about brownies, kid”? “One more politically incorrect dessert item crack like that, and you’re going to the big house”?

“Dos Santos said that the school overreacted and that her son made a comment about snacks, not skin color.”

“He said they were talking about brownies. . . . Who exactly did he offend?” dos Santos said.

Here you see the insidious nature of political correctness at work. “Who exactly did he offend?” What difference does it make? Offending people isn’t a crime! Do citizens even know this any more? Obviously some police departments, school administrators and parents do not.

“The boy’s father was contacted by Collingswood police later in the day. Police said the incident had been referred to the New Jersey Division of Child Protection and Permanency. The student stayed home for his last day of third grade.”

“Dos Santos said that her son was ‘traumatized,’ and that she hopes to send him to a different Collingswood public school in the fall.”

Hopes to? Every single parent with children attending this fascist, brain-addled, hyper-sensitive SJW wreck of a public school should pull out their kids, lest they be sent to a gulag for daring to announce a preference for regular over chocolate milk.

The Inquirer goes on…

“The incident, which has sparked outrage among some parents, was one of several in the last month when Collingswood police have been called to look into school incidents that parents think hardly merit criminal investigation.”

Wait..”some” parents? All parents aren’t troubled by police officers interrogating their children based on what they say? Wait, wait..Parents think these incidents hardly merit criminal investigation? The reporter, editors and newspaper itself are apparently uncertain, and thus are unable to state with confidence and authority, as a matter of public knowledge and reality, that such incidents don’t merit criminal investigation.

“Superintendent Scott Oswald estimated that on some occasions over the last month, officers may have been called to as many as five incidents per day in the district of 1,875 students. This has created concern among parents in the 14,000-resident borough, who have phoned their elected officials, met with Mayor James Maley, blasted social-media message boards, and even launched a petition calling on the Camden County Prosecutor’s Office to “stop mandated criminal investigation of elementary school students.”

In what dystopian society do parents have to launch a petition demanding that a city should “stop mandated criminal investigation of elementary school students”? Was New Jersey taken over by Martians? Donald Trump?

“The increased police involvement follows a May 25 meeting among the Collingswood Police Department, school officials, and representatives from the Camden County Prosecutor’s Office, where school officials and police both said they were told to report to police any incidents that could be considered criminal, including what Police Chief Kevin Carey called anything ‘as minor as a simple name-calling incident that the school would typically handle internally.”‘

Again, stop. My head exploded again. Simple name-calling is not a crime, nor evidence of a crime. Simple name-calling by kids is called “being a kid.”  How could a meeting like this even take place, unless a critical mass of Americans have completely abandoned common sense, proportion and responsibility while never absorbing basic ethical, legal and constitutional principles?

I really don’t understand this story.

Maybe I’m afraid to understand it.

1. This incident appears to be part of society-wide indoctrination efforts to make the next generation terrified to venture any opinion that someone won’t find “offensive” according to approved progressive race/gender/ ethnicity speech, belief and attitude rules. Not just the abused child in this case, but all of the students who witnessed or learned of this abomination surely got the intended message: not only non-conforming opinions, but any words someone else finds “offensive” is a crime.

2. The free speech and free thought threat level in the U.S. should be set at Defcon 1. [Note: I originally had Defcon 5, because I was careless. I apologize.]

3. Our public school system can no longer be trusted with the education of students. This incident can’t be called an anomaly, for such an anomaly cannot occur unless the system and society itself has already been dangerously corrupted. I guarantee that no elementary student has ever been interrogated by police for alleged racist dessert quips. This is because, not too long ago, every single American competent to dress themselves recognized that such a thing would be absurd. How many teachers, school administrators, police and parents no longer know its absurd? A hundred? A thousand? A million? 20 million?

4. Free speech is no longer understood nor sufficiently respected or protected in the U.S., as the comments of the parents and the bizarre meeting prove.

5. Race-consciousness autocracy has to be stopped if the nation is to survive as a free and open society. Who is going to stop it? Donald Trump is not the solution, but if no other serious solutions appear, desperate citizens will take what is available.

6. The nation’s many mounting problems have many sources, but responsibility for this problem has to be placed at modern Progressivism’s doorstep. Its loving embrace of thought and speech control as the means to its ends has  brought us to this precipice. If there is sanity and accountability on the left, it will take the lead in repairing the cultural damage.

7. When police come to schools to intimidate third-graders for their remarks at parties, how far away can a police state be? Not far, if this incident doesn’t spark an immediate and unequivocal rebuke.

79 thoughts on “KABOOM! The Tale Of The Third-Grader’s Racist Brownie Offense: No, I Don’t Understand This At All”