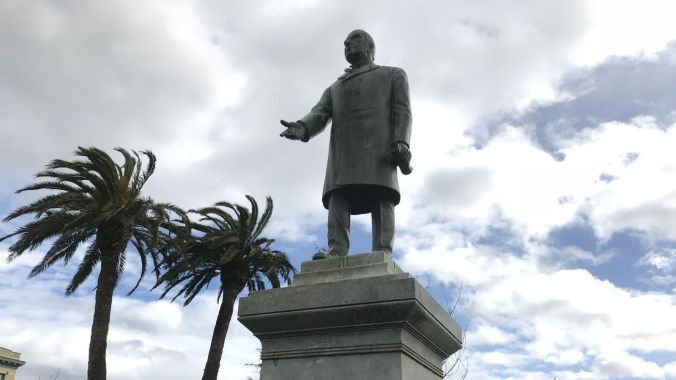 To assist in the analysis of when and whether any honor to a historical figure should be withdrawn, I offered a series of seven guiding principles:

I. The J. Edgar Hoover Principle. Don’t whitewash history. An achievement is an achievement, and a builder, inventor, discoverer, author or founder should be accorded appropriate credit. We can honor a worthy achievement without honoring the entire life of the achiever.

II. The John Paul Jones Principle. Some accomplishments of major value and significance outweigh even serious personal character flaws. The nation owes a debt to Jones, though he appears to have been a child molester.

III. The George Washington Principle. Avoid “presentism or cultural chauvinism, and harshly judging historical figures who held views and engaged in practices that were not regarded as wrong in their times and culture. Recognize a figure for evolving in his beliefs over time, and not blocking reform. Washington was a slaveholder in a culture that lived by slavery, yet he came to believe the practice was wrong, and acted on that belief.

IV. The Thomas Jefferson Principle.  Separate the art, ideas and inspiration from the man. The cultural value of philosophers, artists and writers should be based on their works and their beneficial effects on society, culture and civilization. Their personal flaws and conduct, including hypocrisy, should not be used to diminish their contributions to the nation, the culture, and civilization.

V. The LBJ Principle. Motives do not matter as much as the conduct. The critical civil rights laws that passed under Johnson would not have been possible without his full commitment and political skills, as the tapes of Johnson’s phone conversations with reluctant legislators proves beyond the shadow of a doubt. What he may have thought about black people is insignificant compared to what Johnson did for the country and the black race.

VI. The J.D. Watson Principle. When a historical figure’s major contribution is in one field and the black mark on his legacy is in another, one need not diminish the other. Watson changed the world for the better with his discovery of the double helix. His later controversial comments in race does not diminish our obligation to honor him for that.

VII. The Abner Doubleday Principle. A truly mistaken honor can and should be retracted. If a figure was honored by mistake, if a critical fact about him or her was not known to the public when a memorial or honor was bestowed, or if subsequent scholarship demonstrate that the honored individual actually harmed the interests of those who mistakenly honored him, that honor can be fairly and justly retracted. Plaques giving General Doubleday credit for inventing baseball were based on rumor and faulty research. Posterity has no obligation to bolster a lie.

To these, I now add an eighth:

VIII. The William McKinley Principle. The fact one group views an individual’s life and career negatively and has legitimate grievances against him or her does not justify eliminating an honor bestowed by a community for other achievements.

I should mention that the Chevy Chase Fountain still honors Senator Newlands, and correctly so. Principle I applies.