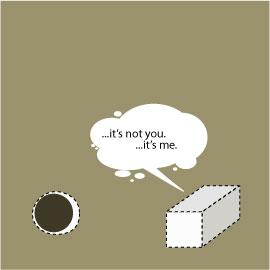 Another perspective on the question  of how the personal and professional misconduct of artists should affect our regard for their art comes from Curmie, a drama teacher, director and blogger who has as deep credentials for this topic as anyone.

Here is his Comment of the Day on the post, THAT’S The Concept I Was Looking For—“Cultural Vandalism”!…

Back in graduate school, I worked as a teaching assistant to a brilliant professor, Ron Willis, in his Introduction to Theatre class. Seitz’s commentary intersects with two of the concepts Ron highlighted in his course. The first of those is what Ron called para-aesthetics: those elements which affect an audience’s reception of an aesthetic event without being the aesthetic event.

These can be entirely coincidental (it’s pouring rain) or created specifically by the production company (the poster). The company many have had some, but not complete, control over the influence (there’s insufficient parking, in part because of another event in the area). The para-aesthetic influence could apply to the entire audience (the leading actor is a big star, the auditorium is freezing) or to an individual (the leading actor is your best friend, the person next to you thinks that showers are for other people, you’ve had a couple glasses of wine before the show).

The fact that a Bill Cosby’s off-camera life has been considerably short of exemplary matters in a para-aesthetic way. But each individual spectator will respond differently to each impulse. That leading actor—my best friend—is someone else’s ex. Facebook tells me that a year and a day ago I saw a play in London with a young movie star in the title role. His presence mattered to me not a bit, but there were dozens if not hundreds of his fans in the house: people who were there specifically to see him. That play was an adaptation of a script I adore and indeed directed a few years ago. The fact that the play as presented bore little if any resemblance to the original bothered me a lot; those who didn’t know the 19th-century version were far more able to accept the 21st-century revision on its own terms.

In other words, our responses are individualized. But it’s more than that, I think. The cognitive dissonance might be too great, for example, to watch Bill Cosby in his eponymous sitcom: the witty but loving and innocuous husband and father character just seems too out of synch with what we now know about the actor. But “I Spy,” in which Cosby’s character, though unquestionably a hero, is at some level living a lie… yeah, I might watch that again.

Cognitive dissonance, then, is affected by a variety of individualized factors, including—in terms of this discussion—the nature of the alleged offense and the perceived credibility of the allegation. This latter point leads us to the other of Ron Willis’s concepts: closure. Ron’s thesis, and I agree with it, is that we as a species have a felt need for closure, for making things fit, so we go out of our way to find the pattern that explains everything. Closure is good at the end of a mystery story, less good in real life. I’ve decided to vote for Candidate X. Therefore, when I hear something really negative about X, my immediate impulse is to reject the new evidence—it’s a smear campaign by Candidate Y or by the fill-in-the-blank-leaning media, or whatever.

Of course, sometimes, rejecting that new information is the thoroughly appropriate thing to do: the allegations against George Takei, for example, now appear to be somewhere between unsubstantiated and outright untruths. Too often, though, actual evidence is ignored. Still, when the accusations attain critical mass, we respond. If there’s any constitutional concept as misunderstood as freedom of speech, it’s “innocent until proven guilty.” If you hear from someone you consider a reliable source that a prospective babysitter snorts cocaine on the job, you’re not going to hire that babysitter… and it is not only acceptable but imperative that you make that decision. That babysitter is not legally guilty of anything (yet), but you’re not the government. You’re not going incarcerate her, but you’re sure as hell going to hire somebody else to take care of your kids.We’re certainly at this point, or indeed somewhat further down that road, as respects a number of big-name celebrities.

We mustn’t be too sure too soon that they have indeed brought all this on themselves, but the fact the we liked this or that movie or TV show or song or whatever can’t be granted any sway in our perception of their off-stage life. Para-aesthetics work only in one direction: it is reasonable that what we know about actors affects our perception of their performance, but we cannot allow our admiration for (or revulsion at) their performance to affect how we regard them as citizens.

8 thoughts on “Comment Of The Day: “THAT’S The Concept I Was Looking For—’Cultural Vandalism’!””