I usually cover this interesting poll when it comes out in early January; somehow I missed it this year., and am getting it in right under the January wire. The results don’t change much from year to year, as you will see,  and this year was no different. 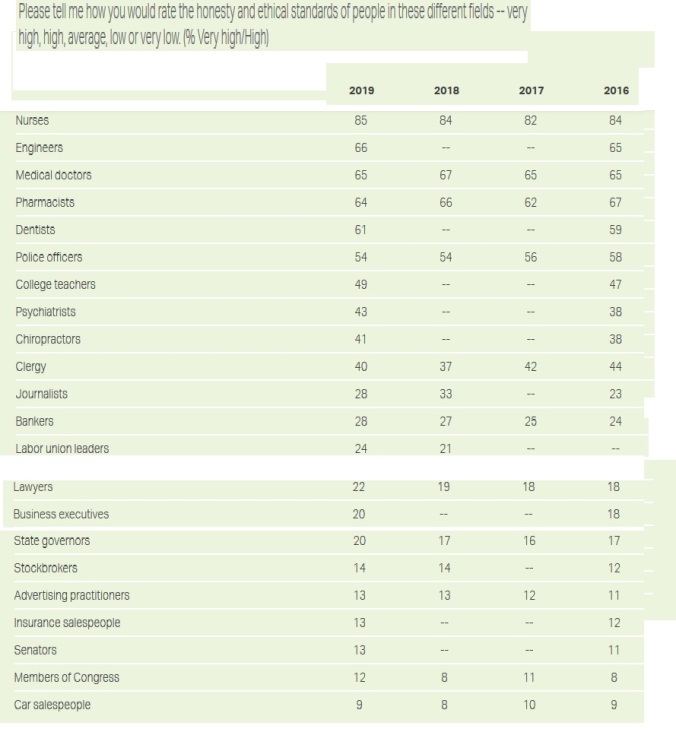 As the have for many years now, nurses, once again, top the list.

The biggest drop was for journalists, as I would have hoped, since they richly deserve it. For some mysterious reason, members of Congress had the largest positive improvement, from a tie with car salesmen to an abysmal one percentage point below insurance salesmen. Next in inexplicable improvements were the clergy, since 2019 was another disturbing year in child molestation revelations, and lawyers, who, like the clergy, rose four points.

Sometimes I think the lawyer rating depends on what TV episodes and lawyer movies those polled have seen.

Two profession in the top six last year, military officers, and grade school teachers,were left out of the poll this year for some reason, as dentists (not many anti-dentites in the polling group, apparently) and engineers were added after a two year hiatus.

Who knows how Gallup decides such things? I would have loved to see the trust vote on President Trump:(U.S. Presidents is an occupation, if an unusual select one); I suspect it would have easily topped the House’s pathetic 12%. I would have also liked to see a number for TV news hosts, late night comedians, professional athletes and Hollywood actors.

You can study the complete question responses and trends here.