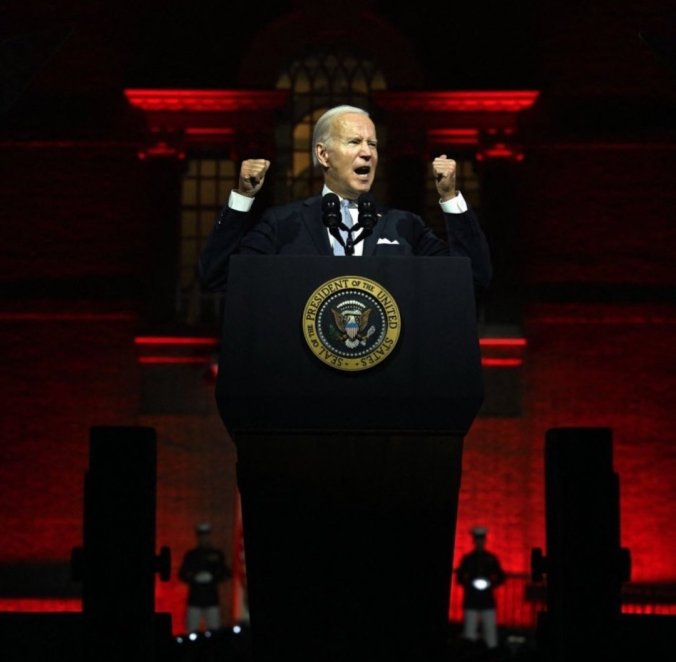 —–Allegedly non-partisan blogger Ann Althouse (she’s a Democrat), providing a preview of her soon to be posted review of Biden’s “soul of the nation” speech.

As soon as I read that Biden was going to give a prime-time speech on the peril to the “soul of the nation,” I knew exactly what was coming, what motivated it (panic and desperation, plus terrible advisers), and what it would be: the ultimate IIPTDXTTNMIAFB.

And wildly unethical, of course: irresponsible, disrespectful, unfair, and un-American, as well as hypocritical, indeed a betrayal, from a leader who promised on his Inaugeration Day, “We can join forces, stop the shouting and lower the temperature. For without unity there is no peace, only bitterness and fury. No progress, only exhausting outrage. No nation, only a state of chaos. This is our historic moment of crisis and challenge, and unity is the path forward.”

I haven’t read the various pundits about the speech yet, and I haven’t read the text yet; I have a doctor’s appointment and I don’t want to be nauseous. I am curious about whether any of the usual Biden cheer-leaders will have the integrity to state the obvious, and what was obvious the second the speech was announced. This is deliberate divisiveness. It is the essence of totalitarian messaging; it is more fascist in intent and substance than anything Donald Trump ever did or said.

The thing should backfire as much as Jimmy Carter’s “malaise” speech.

Ann, as usual, obsesses about a tangential detail: Biden’s use of “Hail to the Chief” to bring himself on screen. She writes:

Imagine if Trump had entered his political rallies with “Hail to the Chief” instead of “God Bless the U.S.A.” To assist you in your imagination, I’ll quote what one English professor, Joseph Rezek, said in March 2017:

There’s a through-line connecting ‘Hail to the Chief’ and the Scottish character at the beginning of it all and Trump that I find totally disturbing… What strikes me… about the analogy with Trump, though, is that Dhu commands absolute loyalty in the feudal way. You have to pledge allegiance. Hail to the Chief—that phrase is about the kind of loyalty you have to show. Trump’s insistence upon such loyalty is the same thing. That can make a seemingly innocuous moment, when the song is played for him, seem a bit darker.

And when it’s played for Biden, does it make the moment darker? It was nighttime, and the backdrop — Independence Hall — was lit in deep red. The rhetoric was demonizing the enemy, the American enemy among us, the people who are not “normal,” not “mainstream.” And our “soul” is at stake.

“Imagine if President Trump did X that the news media is accepting from Biden”! True, I haven’t reviewed the news media, but whys should they start exhibiting integrity now?

Althouse’s commenters, who once were primarily left-leaning and now have only a few remaining Democrat loyalists, are brutal. Here are the first three…

And here’s the latest so far:

And all similar in between.

Yeah, I’m not going to rush any to see the actual speech. I knew what was coming. Didn’t you?

Added: You don’t know how tempted I was to use one of the many versions of that photo above that added a Hitlerian mustache to Joe’s face. I decided it was cheap, but boy, did he ask for it.

Or so I’ve heard…