That’s not Spuds above; that’s Brad Pitt’s wonderful Staffordshire Terrier in “Once Upon A Time In Hollywood,”, one of many breeds dog ignoramuses lump into the category of “pit bull.” Spuds, whom we brought home today, is almost certainly at least part American Pit Bull Terrier, like the dog in the “Our Gang” comedies, but we’ll know better when he gains back more of the weigh he lost when his owner stopped feeding him. Here he is in our kitchen tonight.. 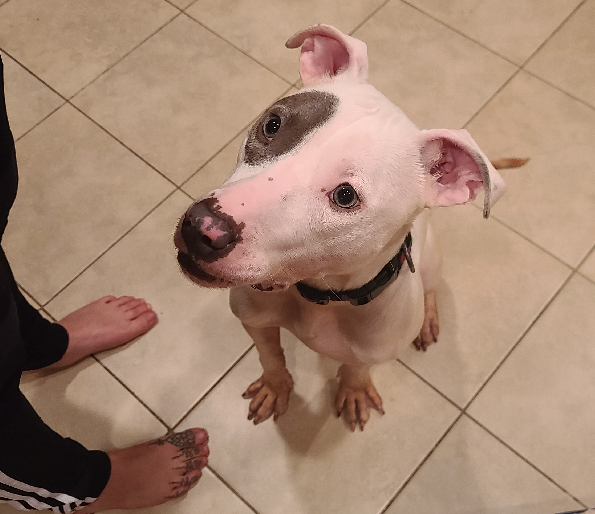 Since he is among the  types of dog who will be subjected to the breed bigotry that has led to the deaths of so many smart, loyal, affectionate and harmless dogs across America and Europe, I’ve decided to re-post this essay from 2015. It is the all-time champion Ethics Alarms post for comments, with 339 and counting. It is also the post that has continued to attract comments the longest after a post went up: the last flurry of reactions from anti-pit bull hysterics was in February of this year.

This despicable website, created by phobics, liars, fools and bigots to promote dog breed prejudice and persecution of responsible dog owners, is discredited by the vast, vast  majority of dog experts, breeders, and people with any knowledge of dogs. It is useful in a way, in that its rhetoric mirrors that of the anti-Jewish, final solution advocates of the Nazi regime, and the most virulent American racists, like the KKK. (A dog breed is exactly like a human race.) It also apes the logical fallacies of those who want to ban guns or engage in racial profiling.

Although a mass of data and history proves that pit bull-related breeds are no more inherently dangerous than any powerful breed and arguably less, Dogsbite.Org is leading a vendetta against both the breeds and lawful, loving owners, reasoning that dogfighting uses pit bull-type breeds, and pit bulls used for fighting are more likely to be dangerous (as any dog so abused  may be), so to kill two birds with one stone, it makes sense to wipe out not just any individual dangerous dog of the type but any dog that is a hybrid of the a “pit bull breed” and any dog that looks like what people think is a “pit bull”, in part because there is no such breed as “pit bull.”

Thus because some “pit bulls” are abused, all should be exterminated.This is essentially the argument of the unethical people at PETA, which announced that it is supporting DogsBite.Org with the batty, but no more so than many of  their positions, argument that we need to destroy the dogs in order to save them.

Pretending that there is some dog-monster known as a The Pit Bull  is just one of the lies (or examples of reckless ignorance)  perpetrated by hysteric  Colleen Lynn  and her deadly band of anti-dogowner fanatics on their website. Denver’s infamous pit bull ban, like Lynn, defines the “breed” as “an American Pit Bull Terrier, American Staffordshire Terrier, Staffordshire Bull Terrier, or any dog displaying the majority of physical traits of any one of those breeds.” This rigged methodology renders the statistics repeatedly cited by anti-pit bull bigots obvious nonsense. When one compares one distinct breed to many or more by falsely representing them as one breed, then it’s not hard to show that the fake breed is disproportionately aggressive. Says the site: “If it looks like a pitbull, then it is one.” It is because of this kind of “thinking” that my American Bull Dog-owning friend is forced to buy exorbitant insurance,  move, or have his family’s gentle companion killed.

Except that his dog is not a member of any of the breeds fairly belonging into the category called “pit bulls,” which are all terrier mixes.  There is no terrier in a bull dog.  Never mind, though: this is about hysteria, fear-mongering,  legislators who care more about votes than they do about fairness or dogs, official ignorance, and cowardice. This is another of DogsBite’s abundant lies: it claims that most people can identify a pit bull accurately. Even most dog owners are lousy at identifying breeds, and phobics, as well as people who have no experience with dogs, often can’t identify any breeds beyond beagles, Lassie, German Shepherds and maybe chihuahuas.

More people asked me if my English Mastiff was a pit bull than ever identified her correctly. I’ve owned Jack Russell Terriers for 25 years, and more people have asked me if they were pit bulls (actually, they are a lot closer to pit bulls than a mastiff is, or an American bulldog) over that time than identified their ( wonderful, merry, loving and frighteningly smart) breed correctly. The tendency of journalists and police to mistakenly attribute attacks to pit bulls is well-documented, but the website just denies it. It also falsely claims that the American Kennel Club has tried to confuse the public by re-naming breeds in order to disguise what really are pit bulls. The AKC breeds lumped into the imaginary pit bull category all predate pit bull hysteria. When I was growing up, everyone was terrified of Doberman Pinschers (another loyal, intelligent, loving breed.)

The misguided, unfeeling, reveling in ignorance fools who man this website share responsibility for the pain and misery that thousands of families have had to experience when their loving pets and companions have been taken from them by a local government and gassed simply because killing them is part of the warped pit bull “final solution.” Dogsbite.Org deals in bad statistics, debunked fallacies and anti-dog propaganda that has turned into cruel legislation in communities all over the country. Their tactics succeed because craven political hacks would rather kill harmless pets than risk losing the votes of PETA members, dog breed ignoramuses and bigots.

I’ve written a lot on this topic. This isn’t even a close call on the facts. Most of all, you should view the heart-breaking documentary, Beyond the Myth.

If  friends start repeating the DogsBite lies, introduce them to an American Pit Bull Terrier, American Staffordshire Terrier,  Staffordshire Bull Terrier, or any mixture thereof. I can take my Jack Russell to a dog park in Arlington, Virginia, where, on any nice day, between 10 and 30 of these terrific, playful, obedient dogs will be romping happily and harmlessly among other breeds, large and small, and young children. The key fact is that none of the owners are dogfighters, drug dealers or Michael Vick.

UPDATE: In the future,  comments to this post that consist of nothing but repeating the same, disproven myths and ignorant beliefs about the various pit bull breeds will not get through moderation. Any serious, well-researched, civil comments presenting counter arguments and genuine statistics to the facts and expert opinion discussed in these posts are welcome. Citing dogsbite.org as authority will guarantee rejection. Lumping multiple breeds together as “pit bulls” proves laziness, bias and ignorance, and will also result in the comment being spammed. Dumb arguments like “You can’t prove they aren’t pit bulls!” will have the same results.

It is depressing how many people will hold on to a factually unsupportable bias despite every effort to enlighten them, but then prejudice against humans works the same way.

11 thoughts on “In Honor Of Our New Dog Spuds, A Timely Ethics Alarms Encore: “Unethical Website of the Month: Dogsbite.Org””