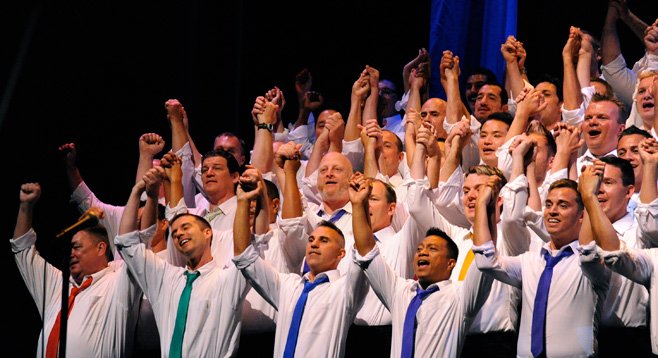 Allow me to elaborate, guys.

Let’s take your recent unfortunate experience at the San Diego Padres game last night No doubt about it, somebody, probably lost of people, messed up big time.

Before the Dodgers-Padres game at Petco Park, a hundred singers from your San Diego Gay Men’s Chorus  assembled on the field  to sing the National Anthem. Then, just as you were getting ready to sing, and very well, too, if the Gay Men’s Chorus of Washington, D.C. , which I have heard sing many times, are any indication, somebody put on a recorded version  a woman singing it instead. Was it  Lady Gaga? I hope so; that was great.   I guarantee it wasn’t a recording of Rosanne Barr wrecking the song at a Padres game in 1990, but if you want to put what happened to you in perspective and haven’t heard it, here it is. Okay, I’m ready: I have my eyes closed and my fingers are on my ears:

But I digress.  Here you all were, out on the field, ready to sing and entertain the fans, and you are suddenly listening to a recording over the loudspeakers.Nobody stopped it,  no announcement, explanation or apology followed it. You all had to just stand in center field feeling and looking awkward until the song finished, the crowd cheered, and  they escorted you off the field.

Unfortunately for us, we were just a group of middle-aged white, mostly heterosexual singers, so we couldn’t get headlines by crying discrimination and bias and making ourselves martyrs by unfairly accusing someone of malice–like you did to the Padres.

Ah, but you rushed to play the victim card, specifically the very popular and effective “victim of homophobia card,” because you could, with the San Diego Gay Men’s Chorus issuing a J’Accuse! public statement huffily claiming that the incident raises “serious questions about homophobia.” No, guys, it really doesn’t. It raises no issues about homophobia at all, any more than my experience on board the cursed ship “Dandy” suggested that Gilbert and Sullivan performers were the objects of hate from the graduating class of the commuter college that hired us. In fact, it is probably the least plausible explanation for the snafu imaginable. Why would the Padres invite the Gay Men’s Chorus to perform at all if it was determined to be mean to you because of your sexual orientation? Why would it seek to make the ball club look incompetent? Given the current tendency of any minority group today to scream “Bias! Hate! Microaggression!” any time someone looks at them cross eyed because they can get attention, sympathy, and interviews on MSNBC, why would the Padres, out of the blue, think of doing such a stupid, self-destructive thing, all while lousing up the National Anthem at a Padres game AGAIN?

They wouldn’t. See, and I know that you’ve never done this, because Heaven knows gay singers are perfect, but sometimes people make mistakes. Sometimes, these mistakes just happen to be especially unpleasant for blacks, Muslims, Jews, women, seniors, the disabled, and LGBT citizens who have victim cards in their holsters, ready to draw, but if these unintentional victims are capable of empathy, proportion, common sense and fairness, they have the mutual respect for those not in their increasingly insular, easily aggrieved and self-righteous to apply the Golden Rule, be gracious, and not blow everything completely out of proportion.

Oh, you’ll get some grovelling, I’m sure. The Padres have apologized, saying,

“This evening, during the pregame ceremony, a mistake was made in the Petco Park control room that prevented the San Diego Gay Men’s Chorus from performing the National Anthem as scheduled. We apologize to anyone in the ballpark who this may have offended, and have reached out to the Chorus to express our deep regret for the error.”

In this case, the non-apology apology language “we apologize to anyone who was offended” language is appropriate. There was nothing to be offended about. It was a screw-up. Was anyone offended when Obama said there were 57 states? Was anyone offended when the minister at the wedding of one of my best friends started reading the funeral service instead? No, because these were mistakes, obvious, genuine mistakes.

The team also , quite correctly, noted that it was obviously a mistake, and no malice was intended. The San Diego Gay Men’s Chorus has performed the anthem at Petco before without incident. The Padres routinely offer events oriented toward the lesbian, gay, bisexual and transgender including “Pride Nights” such as the one offered Saturday, and “Out at the Park.”

But it feels so good to play the victim, right, guys? John Brown, executive director of the San Diego Human Dignity Foundation, which promotes civil rights for lesbian, gay, bisexual and transgender people, said he wondered if the incident was a prank, rather than an accident, and said it reflects poorly on the team.

You really wonder that, John? Then you’re an idiot. If I gave to your organization, I’d stop.

“This is a time when the Padres are really looking to build community support,” Brown said. “They’ve got to understand that the LGBT community is large in San Diego, it is supported by our community’s leaders, and the majority of people who live here. This kind of thing isn’t acceptable at all.”

You know what isn’t acceptable, John? Gay men going out of their way to behave like the worst stereotypes of gay men. This is silly drama queen stuff.  The Chorus statement said that “some fans”  said things like “you sing like a girl.” So what does this mean, that the Padres scripted stupid things for some fans to yell, because we all know baseball fans don’t yell stupid things all the time, every game, all game long?

You are humiliating yourself far more with this tantrum than when you were prevented from singing. Be adults. Everyone’s sorry. It wasn’t intentional. Cut this out. You are making it more difficult for victims of genuine discrimination against LGTB people to have their complaints taken seriously.

Apparently, some members of your  chorus are calling for an investigation by the team, the city of San Diego and by Major League Baseball. Are you serious?  What do you want, some low level employee with the park to be fired? Would that soothe  your widdle hurt feelings?

You are performers. Crap like this happens to performers all the time. Those who are mature and reasonable professionals accept it as part of the craft. Well, the ones who don’t get off on playing their victim cards, anyway.

If I were head of the Padres, I would announce that until the team receives a gracious apology from the San Diego Gay Men’s Chorus for its insulting and unwarranted accusations, there will be no more invitations to sing at Petco Park. Your conduct doesn’t unite the community, it is part of what divides it, a sad eagerness to interpret every action as hostile, and to not give the benefit of the doubt to those not in your tight little group, who are human beings too.

Shame on you all.

12 thoughts on “Dear San Diego Gay Men’s Choir: Yes, Disappointments And Screw-Ups Are Annoying, But They All Aren’t Part Of A Conspiracy Against You, And You Make Your Cause And Yourself Look Foolish By Being So Eager To Play The Victim Card”